Concrete Ontario rolled out of its pedestrian and cyclist safety awareness campaign Thursday. The campaign centers around educating the public on various blind spots that are present to a concrete mixer driver when it comes to being able to see pedestrians, cyclists and all other vehicles that may be crossing, passing or behind the truck. 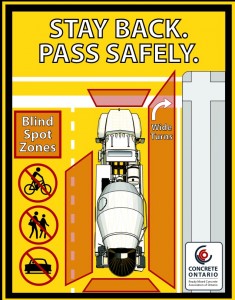 The campaign includes a number of awareness tactics including a blind spot poster titled “I Can’t See You… If You Can’t See Me”. The posters have been distributed to all participating elementary and secondary schools in Ontario. Concrete Ontario has made every effort to co-ordinate approval of displaying the poster with all the school boards and schools. A secondary element includes a truck sticker that members can post on their trucks advising of the blind spots, and a best practices guide distributed to all members on how to reduce blind spots and the common pedestrian and cycling markings that are used on today’s roads.  The campaign will also include a social media campaign, dedicated safety portal on the Associations’ website and co-ordination of education sessions at schools where possible, in hopes of making our shared space safer.

“On a daily basis, the ready mixed concrete industry in Ontario operates over three thousand concrete mixer trucks in the province for delivery of concrete to jobsites to help build the communities, in which we live, work and educate in,” said Chris Conway, president and CEO of Concrete Ontario. “As such, our drivers are the backbone and ambassadors of our industry and they make every effort to keep our shared roads safe and injury free.”

The awareness campaign, created internally by Concrete Ontario, and fulfilled by Proforma Instant Promotions, follows many months of comprehensive research and tactical execution, coordinated by the Association, between its Health & Safety and Transportation Committees, and supported by all members. The visual elements of the campaign materials utilize graphical elements and colour schemes found in common road signage, making simple easy to read messaging.

Tom Bellis, Concrete Ontario’s Director of Marketing and Communications, said: “This is one of the largest safety campaign initiatives that the Association and concrete industry has undertaken.” He also added that “We are confident that the campaign will not only raise awareness and educate the public about safety around concrete trucks, but also be used as a universal message regarding safety around all commercial vehicles on the road.”