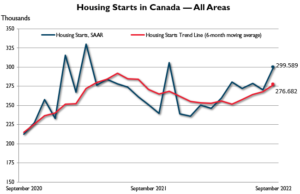 September’s standalone monthly SAAR of total housing starts for all areas in Canada was at its highest point since November of 2021, coming in at 299,589 units. While not quite at the 305,889 units reported in November of 2021, Canada Mortgage and Housing Corporation (CMHC) says that the gains were significant and represented an increase of 11 per cent over the August figures.

He said that starts are elevated in 2022, adding that the trend in housing starts was 276,682 units in September, up three per cent from 267,813 units in August. This trend measure is a six-month moving average of the monthly seasonally adjusted annual rates (SAAR) of housing starts.

CMHC uses the trend measure as a complement to the monthly SAAR of housing starts to account for considerable swings in monthly estimates and obtain a clearer picture of upcoming new housing supply.