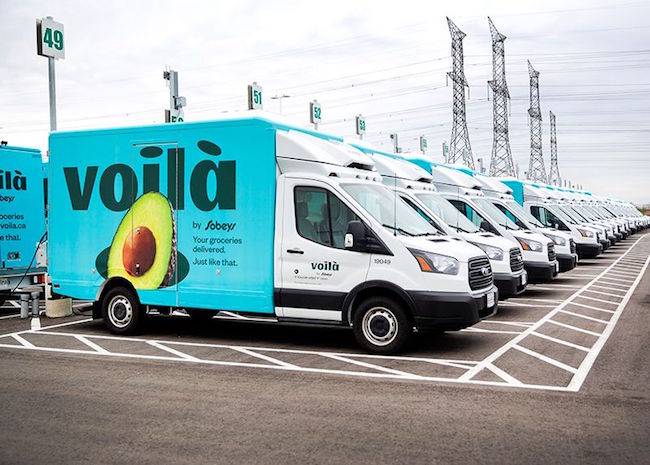 Delivery vans outside Sobeys’ new fulfillment centre in Vaughan, Ont. The company is planning two more of the warehouse sites to support the rollout of its e-commerce, home delivery offering. PHOTO: Sobeys

STELLARTON, N.S.—Empire Company Ltd. plans to spend $2.1 billion over the next three years on building and renovating stores, expanding its e-commerce offering and growing its private label portfolio as it drives to add $500 million in annualized earnings.

Empire, which owns the Sobeys and Safeway grocery chains, unveiled a new three-year strategy dubbed project horizon focused on growing its market share and building on cost efficiencies it started to realize with its previous three-year strategy project sunrise, which recently wrapped. It achieved more than its savings target of $550 million.

“Empire now has the team, the structure and the vision to achieve its sales and earnings potential,” said Michael Medline, CEO, in a statement.

He highlighted the urgency for the industry amid the COVID-19 pandemic — though the plan’s financial target of a $500 million increase in yearly EBITDA (earnings before interest, taxes, depreciation and amortization) does not include impacts related to the global crisis.

“As the retail landscape in Canada continues to react and shift under the seismic waves caused by the pandemic it is clear now, more than ever, that we must be able to serve customers where, when and how they want to shop,” he said, pointing to the plan’s focus on driving growth and what the Nova-Scotia-based chain called planning to “win at e-commerce.”

The focus on growing market share includes accelerating plans for the company’s two e-commerce fulfilment centres that have yet to be built.

Empire partnered with British firm Ocado to build four robotics fulfilment centres in Canada. It opened the first in the Greater Toronto Area in June, and the second one in Montreal is under construction. Empire expects that the automated warehouse will start operating in early 2022 thanks to a slight construction delay due to the pandemic.

Empire will “accelerate” plans for the two remaining fulfilment centres in Western Canada. Details on the locations were not disclosed.

It will also test a store pick solution also using Ocado’s technology at the end of the summer in Nova Scotia that will offer online grocery home delivery from a large selection of products. It plans to expand that service across the country over several years, focusing on areas without the density to justify a fulfilment centre and as an interim solution where its fulfilment centres will be built.

The company also plans to grow its market share by investing in its store network, improving store space productivity, growing its private label portfolio and providing personalized communication and offers to customers.

Empire will add about 20 new Farm Boy locations in Ontario and convert between 30 and 35 conventional stores in Western Canada to FreshCo.

The company will continue to build “on cost and margin discipline” by using technology to improve its systems and processes, optimize its supply chain productivity and other measures.

The new plan is “essentially consistent with expectations,” said Irene Nattel, an RBC Dominion Securities Inc. analyst, in a note. Though, the planned spending and targeted benefits are above current forecasts, she said.

She noted Empire currently lags behind competitors Loblaw and Walmart “in terms of national e-commerce availability and share of wallet.”

Walmart Canada recently announced it plans to invest $3.5 billion over the next five years with a focus on technology to make so-called “smarter stores.”

It will build two new distribution centres and renovate an existing facility, as well as renovate 150 stores over the next three years.

The announcement also included plans to accelerate digitization, such as expanding electronic shelf labels, and revamping checkouts. The chain said it would aim to offer a complete merchandise pick-up service at about 70 per cent of its Canadian locations by the end of the year.