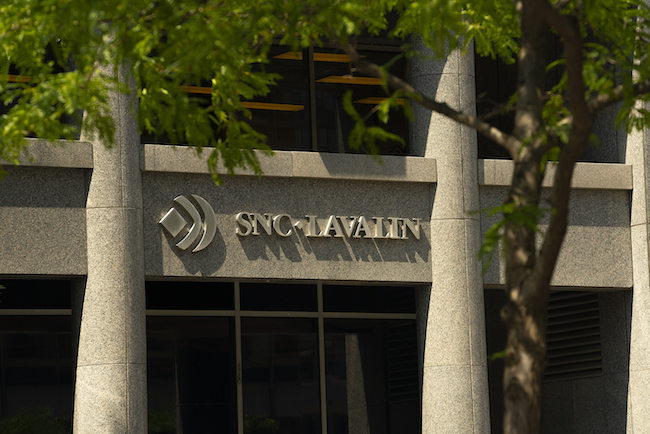 The plea deal comes on the heels of the conviction of a former company executive last Sunday. PHOTO: SNC-Lavalin

MONTREAL—SNC-Lavalin Group Inc. settled criminal charges Dec. 18 related to business dealings in Libya, with its construction division pleading guilty to a single count of fraud and bringing the engineering giant a step closer to ending a long-standing scandal that tarnished its reputation and ensnared the highest office of the Canadian government.

The plea deal includes a $280-million fine to be paid over five years and a three-year probation order, and appears to free SNC-Lavalin from the damaging prospect of a ban on federal contract bidding.

The agreement in the Court of Quebec stays all but one of six charges of corruption and fraud brought against SNC-Lavalin and two subsidiaries in 2015.

It also stipulates that SNC will engage an independent monitor who will release regular reports and can order changes to the company’s compliance and ethics programs.

The guilty plea represents an opportunity for the company to turn a corner since questionable practices first surfaced in 2012 and prompted the departure of former chief executive Pierre Duhaime.

“This is a game-changer for the company and finally allows us to put this issue behind us. I apologize for this past misconduct and welcome the opportunity to move forward,” said CEO Ian Edwards, in a statement.

“The reputation of the company is tarnished,” defence lawyer Francois Fontaine told reporters. “Judicially it’s a very good result, but the company still has a lot of work to do to show that it’s a new company and gain the confidence of clients.”

SNC-Lavalin shares soared on the news, closing up $4.58 or 18.99 per cent at $28.70 on the Toronto Stock Exchange. Shares had been halted prior to market open.

SNC-Lavalin admitted in its plea that the company — via the actions of top executives Riadh Ben Aissa and Sami Bebawi — defrauded Libya of millions between 2001 and 2011.

SNC-Lavalin Construction Inc. relied on a pair of shell companies incorporated in Switzerland and Panama and controlled by Ben Aissa to pay Saadi Gadhafi, son of the late Libyan dictator Moammar Gadhafi, nearly $48 million for contracts he helped secure, “altering the competitive bidding process and causing a loss or a risk of loss to the Libyan people,” the Public Prosecution Service of Canada said in a statement.

The construction projects, which ranged from the Benghazi airport to the “Great Man-Made River” water pipeline, reaped nearly $1.8 billion in revenue and $104 million in net profit for SNC within a decade.

“This sentence must be a deterrent generally, but must not be crippling,” said Crown prosecutor Richard Roy .

Asked whether the deal lets the company off easy, he replied that it reflects “the severity of the crime…I challenge anyone to find a fine that is higher than that for a criminal offence.”

The plea deal comes on the heels of Bebawi’s conviction last Sunday, when a jury found the ex-SNC-Lavalin Construction president guilty of paying off foreign officials and pocketing millions as he worked to secure contracts for the company in Libya.

One of the biggest risks faced by SNC-Lavalin in the event of a conviction on corruption charges involving foreign officials was its ability to bid for construction projects in Canada and abroad. Under federal law, a bribery offence could result in a bidding ban for federal contracts for up to 10 years. It could also prompt a ban on bidding for projects backed by the World Bank.

While fraud committed against the Canadian government is covered under the public works department’s integrity regime — and could thus trigger a ban — a fraud offence connected to a foreign government is not, said Kenneth Jull, an expert in financial crimes and corporate compliance at Gardiner Roberts law firm in Toronto.

“It’s very clever. You could say it’s almost like a DPA through the back door,” said Jull, who has endorsed deferred prosecution agreements (DPA) — a type of plea deal that steers clear of admissions of guilt — as a way to avoid punishing innocent employees for C-suite offences.

SNC-Lavalin said in a statement it does not anticipate the guilty plea will affect bidding on future projects by any of its companies.

“The feared outright ban on public work is far removed from the worst-case scenarios that have floated around the company,” said analyst Maxim Sytchev of the National Bank of Canada.

While a cloud may linger above the beleaguered firm, it is “no longer a pariah investment,” he said in a note to investors. “We do expect the corruption ‘discount’ to dissipate over time.”

Nearly one-third of SNC-Lavalin’s $9.3 billion in revenue in 2017 came from Canada, down from roughly a 60 per cent share of revenue in 2014. Analysts estimate that up to half of its Canadian revenue stems from federal contracts.

The SNC-Lavalin case became a crisis for the governing Liberals after then-attorney general Jody Wilson-Raybould claimed she was pressured by people in Prime Minister Justin Trudeau’s inner circle to settle criminal charges against the company through a new legal tool comparable to a plea deal.

Trudeau and his aides had argued that a criminal trial could trigger the company’s exit from Canada and the loss of thousands of jobs.

Edwards said in October that he did not expect a plea deal on the criminal charges in the wake of the Liberal election victory.

“We kind of remain focused on defending ourselves through a court process,” he told investor on an Oct. 31 conference call. “Obviously if there were opportunities for settling this in another way, we’d be open to that. But we don’t expect it.”

Attorney General David Lametti had refused to shut down the possibility of such an agreement, which would drop the charges against the firm in exchange for SNC admitting responsibility for breaches and agreeing to conditions such as a fine and third-party oversight.

Lametti was not involved in the plea bargaining that took place over the past few months, Roy said. Director of Public Prosecutions Kathleen Roussel had been consulted ahead of the plea deal, he added.