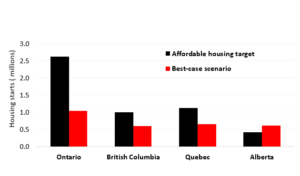 Even under a best-case scenario, housing starts will fall well below the 2030 affordable supply targets in Ontario, B.C. and Quebec, although Alberta would be able to build to its needs, says Canada Mortgage and Housing Corporation (CMHC).

This past June, CMHC released Canada’s Housing Supply Shortages: Estimating what is needed to solve Canada’s housing affordability crisis by 2030 (ESG 2030), which took initial steps to estimate how much additional housing supply is required to restore housing affordability by 2030. A major challenge to reaching those objectives, says the organization, is the amount of skilled labour required.

Using the housing supply targets outlined in ESG 2030, CMHC has released a follow-up report, Labour Capacity Constraints and Supply Across Large Provinces in Canada, which examines the skilled labour capacity to deliver on the needed level of housing supply in Ontario, Quebec, B.C. and Alberta.

Looking at a best-case scenario, which assumes maximum labour capacity, the report compares housing start projections to the affordability supply targets set out in ESG 2030 and CMHC baseline starts forecasts. Despite this best-case scenario being based on the highest percentage of people working in residential construction and the lowest number of construction workers needed per housing unit, three of the four provinces still fall short.

Under a best-case scenario, labour capacity exists only to increase housing starts activity across all four major provinces between 2022 and 2030 by an annual average of 30 to 50 per cent above CMHC’s baseline housing starts forecasts. To reach a starts target that would meet affordability parameters, Ontario, Quebec and B.C. would need to double their best-case labour capacities.

The report suggests an all-hands-on-deck approach is needed to increase the supply of housing to meet affordability demands. This would include building on innovative ideas and initiatives being used in the current housing industry and through the federal government’s National Housing Strategy.

Among the solutions proposed are increasing construction of multi-unit housing projects, incentives to develop a new generation of skilled construction workers, targeted immigration programs, and the conversion of existing structures, including hotels, motels and office space, into residential units through the federal government’s Rapid Housing Initiative.