If elected, the Opposition leader said he would create a dedicated route where a wide range of projects, from pipelines to power lines, would be easier to build 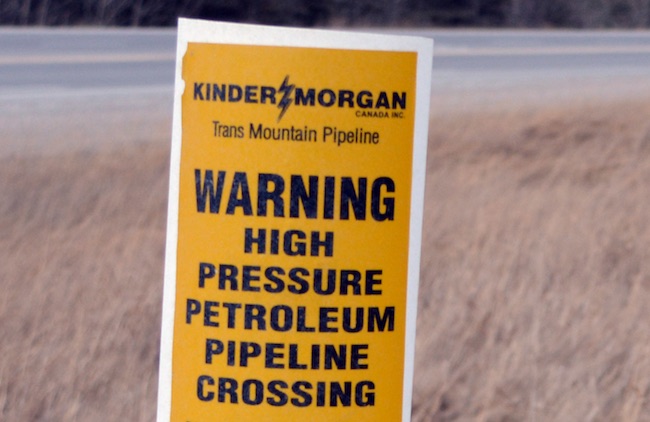 The inability to get pipeline projects, including the twinning of the existing Trans Mountain pipeline, off the ground has hounded the federal government. PHOTO: Trans Mountain

With the federal election less than six months away, Scheer used a speech Thursday in Toronto to share his economic pitch to voters.

The address tried to sell the Tories as careful stewards of the public treasury as opposed to the deficit-running Liberals that Scheer accused of using taxpayers’ pockets as a “bottomless pit.”

The Opposition leader told a business crowd that, if elected, he would work to create a dedicated route where it would be easier to approve major energy projects — from pipelines to power lines.

“With a single corridor, we could minimize environmental impacts, lower the costs of environmental assessments, increase certainty for investors, and, most importantly, get these critical projects built,” Scheer said to the Economic Club of Canada.

Planning and consulting for the right-of-way would be done up front, sparing industry of the complicated process of submitting proposals for new projects, he said. The corridor, he added, would be designed in full consultation with provinces and Indigenous communities.

Scheer promised to help ensure Canada no longer needs foreign oil — and be “fuelled exclusively by Canadians by 2030.”

Oil imports from countries like Iran, Venezuela and Saudi Arabia have supported regimes that “abuse human rights and take virtually no steps to protect the environment,” he said.

“The fact is Canada has more than enough oil — not only to displace imports from the aforementioned rogue states — but to put an end to all foreign oil imports once and for all,” he said of a goal that could boost the economy in Western Canada.

Scheer also touched on a housing-policy change that could have a significant impact on the economy and financial stability. Without providing much detail, he promised to adjust the tougher mortgage-lending rules introduced in recent years.

The policies were designed to cool sizzling housing markets in Toronto and Vancouver, and to slow further build-up of household debt loads already at record levels.

“I will re-work the mortgage stress test the Liberals brought in a couple of years ago that have pushed the dream of home ownership out of the reach of so many Canadians across this country,” Scheer said.

He also promised to work with provinces and municipalities to make sure new homes can come on the market at lower prices by eliminating regulatory barriers for construction.

The tightened mortgage rules, brought in by Finance Minister Bill Morneau, mandated would-be borrowers undergo a stress test to determine whether they could still make payments if faced with higher interest rates or less income.

Bank of Canada governor Stephen Poloz has credited stricter mortgage policies — the federal measures as well as those implemented by other levels of government — for helping ease vulnerabilities related to household debt and speculative behaviour in some markets.

Parts of Scheer’s speech followed the Conservatives’ almost-daily criticisms of the Liberals for abandoning their 2015 election vow to post annual deficits of no more than $10 billion and to balance the books by 2019.

Instead, the Trudeau government has run bigger shortfalls, including deficits of more than $18 billion in each of the last two years, without a timeline to return to balance. The Liberals have argued the extra investments have been done in a responsible way and were needed to lift long-term economic growth.

Heading into the election, the fate of the federal balance sheet is poised to be among the most frequently debated issues.

Scheer didn’t provide a Tory vow for eliminating the deficit — but, in a line designed to fend off opponents’ attacks, he stressed that “drastic spending cuts” wouldn’t be necessary to get there.

“They’re going to hurt people and, worse than that, they’re actually going to shrink our economy … and what that’s going to mean is fewer jobs,” Morneau told reporters in Toronto.

“What I can tell you is that Andrew Scheer is taking a risky approach.”

At the national level, the economy has enjoyed a strong run since 2017, except for a recent slowdown that lasted through much of the winter. The Liberals have tried to take credit for the performance.

On Scheer’s energy-corridor proposal, Morneau says it would only succeed in pitting provinces against each other. He also said Scheer’s vow on mortgage lending tests was “cavalier.”

In his speech, Scheer also pledged to kill the so-called infrastructure bank, a Liberal creation designed to attract private-sector investment for public construction projects. The Liberals have committed $35 billion in federal funding and backstops towards the bank.

The address was the second in a series of speeches Scheer is using to introduce major Conservative policies ahead of the October vote.