Sale of $4B petrochemical plant being built in Alberta a possibility: Inter Pipeline CEO 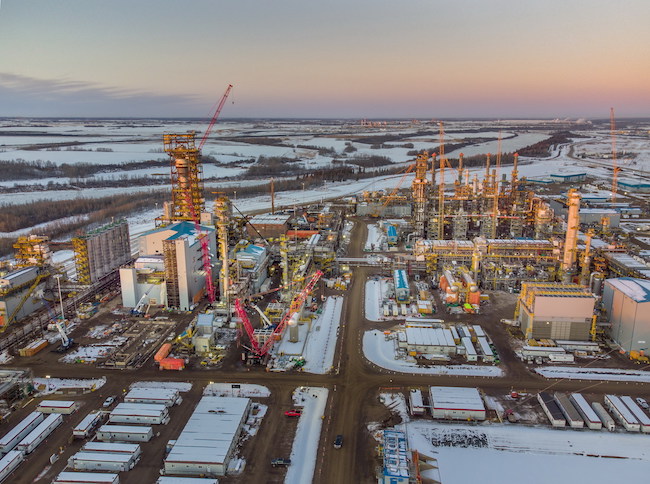 The company has spent roughy $3.2 billion on the petrochemical plant so far. PHOTO: Inter Pipeline Ltd.

CALGARY—The CEO of Inter Pipeline Ltd. says the Calgary-based company’s review of strategic alternatives announced Feb. 18 could include the sale of its $4-billion Heartland Petrochemical Complex under construction near Edmonton and expected to open in early 2022.

On a conference call to discuss fourth-quarter results, Christian Bayle said Friday the sale of the complex is possible, along with the corporate sale mentioned in a news release, but would say only that a broad range of options are being considered when analysts asked for more possibilities.

The review is in response to an offer by Inter’s largest shareholder, Brookfield Infrastructure Partners LP, to buy the rest of the company for $16.50 per share, a price that values Inter at about $7.1 billion.

Brookfield said it has previously discussed prices with Inter “in the range of $17 to $18.25” per share but would need to study its books to “substantiate” its growth potential and commercialization objectives for Heartland before increasing its offer.

Bayle wouldn’t say whether company representatives have met with Brookfield since the offer was made but confirmed that Inter will soon release details on Heartland’s contracts and earnings potential.

“The board has determined that the company will in the near term provide a fulsome commercial update on the status of contracting for the Heartland complex,” said Bayle on the call.

“At that time, we will also provide additional EBITDA guidance specific to the early years of the project.”

About $3.2 billion has been spent on the Heartland project as of the end of 2020, Inter reported.

The profitability of the project designed to convert abundant Alberta propane into polypropylene plastic pellets for export to manufacturers has improved recently, Bayle said, making it more attractive than ever to potential customers and the investment partner it’s been trying to find.

“The spread between propane and polypropylene has widened to approximately US$1,800 per tonne in January, roughly 35 per cent higher than the five-year historical average,” he said on the call.

“This strengthening in price materially improves the indicative economics for current and prospective propane and polypropylene customers.”

In a report, RBC analyst Robert Kwan said the formal initiation of a strategic review is a “directionally positive development” for Inter that provides greater transparency to the market, although he still believes the company will not be able to avoid a change in ownership status.