Renovating the Port of Ste-Catherine

Construction has started to replace and repair more than 1.5 kilometres of storm water pipes, drainage and concrete slabs. 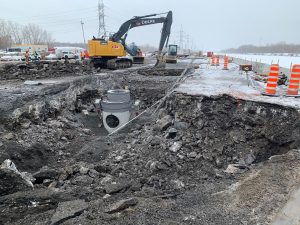 One of Canada’s smallest but most strategic harbours, the Port of Ste-Catherine, is undergoing a two-year refresh. The major infrastructure restoration project located near the Lachine Rapids and facing Ile-du-Seigneur on the south shore of the St. Lawrence River will see the construction of more than 1.5 kilometres of storm water pipes, drainage and concrete slab repairs.

Heading up the project is ALI Excavation Group, which has started to navigate work made more challenging by the presence of rock, the proximity of waterways, and the need to excavate trenches more than seven metres deep, all while orchestrating schedules to avoid interfering with port operations.

“The presence of an important pumping system and the renovation of seven water treatment units also represent another challenge from the point of view of excavation, which is carried out during the winter period,” said Marc-André Loiselle, president and chief executive officer of the company.

Excavation work began in late January 2022, and the project is expected to last two years. Sawing, vertical drilling and concrete work will be carried out throughout the winter. Paving will be carried out with the arrival of good weather and optimal climatic conditions next spring.

In fact, explained Loiselle, the Sainte-Catherine wharf, also known as the Baillargeon wharf, marked an important milestone late last summer when it received wind turbine parts from Europe destined for a local renewable energy project in the Monteregie region: one of the largest shipments in its history.