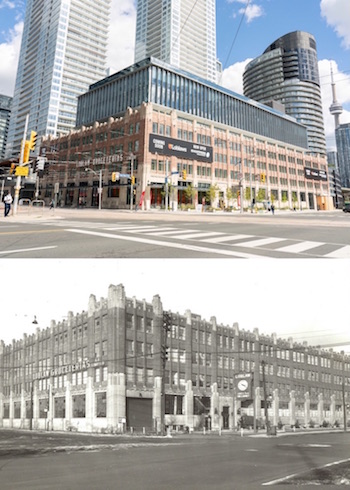 Contractors have officially capped off a $400 million heritage redevelopment project near the foot of Bathurst Street in Toronto.

The mixed-use redevelopment work, headed by EllisDon as general contractor, included the brick-by-brick restoration of the original warehouse and construction of two residential towers with 850 units.

“When the building first opened in 1928 it was hailed as the most modern warehouse of its kind,” Galen Weston, executive chairman of Loblaw, said in a release. “Our task was to reconstruct a space that represents Loblaw’s exciting future and properly captures the essence of both its history, and that of the city.”

Originally home to the first Loblaws Groceterias, the retailer occupied the site until the 1970s, when the building was handed over to the Daily Bread Food Bank. The facility was vacant between 2000, when the food bank relocated, and 2015, when restoration work began.

Along with the new residential space, the revitalized site at the northeast corner of Bathurst Street and Lake Shore Boulevard houses a Loblaws, Shoppers Drug Mart and five floors of office space.

Wittington Properties served as the developer for the project, which is owned by Choice Properties REIT.