Public transit to get boost in Mississauga

New rapid bus corridor among the projects to receive funding. 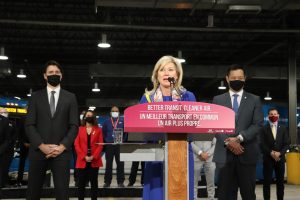 More than $675 million has been earmarked to construct and upgrade public transit in Mississauga, Ont., including the building of a new rapid bus transit corridor, upgrades to existing corridors and the purchase of new buses.

Prime Minister Justin Trudeau joined Ontario’s associate minister of transportation for the Greater Toronto Area, Stan Cho, and the Mississauga mayor Bonnie Crombie to announce the projects, which will be jointly funded between the three levels of government.

The city, west of Toronto, will see a new rapid transit bus corridor along Dundas Street, from Confederation Parkway to the Etobicoke Creek, as well as upgrades to its existing bus corridors. This will include the construction of priority bus lanes at intersections to reduce traffic and commute times.

“Today’s investments will make Mississauga an even better place to live and work by helping Canadians get where they need to be in cleaner, faster, and more affordable ways,” stated Trudeau. “Improving public transit across the country makes our communities healthier and fights climate change, while creating good middle-class jobs.”

“This is a big day for Mississauga,” stated Crombie. “Funding to build rapid bus transit along Dundas Street, in particular, will make it easier for residents to travel to and from Mississauga and is critical for regional economic growth and recovery.”