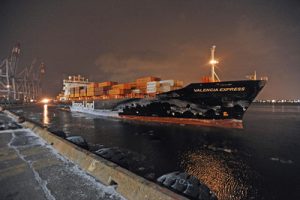 The Valencia Express was the first ocean-going vessel to reach the Port of Montreal without a stopover in 2015. (CNW Group/Montreal Port Authority)

The Honourable Marc Garneau, Minister of Transport, and Sylvie Vachon, president and CEO of the Montréal Port Authority, celebrated the inauguration of a new container terminal in the Viau sector on November 18.

“The new Viau terminal will have a considerable impact. Ultimately, it will increase the Port of Montréal’s handling capacity by 2.1 million TEUs and generate significant benefits for the region, province and country as whole with annual spinoffs of $340 million and the creation of 2,500 direct and indirect jobs. The success of this project is the result of a significant collaboration between public and private organizations, including Termont Montréal Inc. and Mediterranean Shipping Company S.A. Moreover, the work was carried out with concern for communities and the environment. There is much to be proud of,” said Vachon.

The construction of the new terminal is part of a broader port capacity optimization project covering three essential areas: the terminal’s container-handling capacity, marine access and road access. The Port of Montréal must be active on all three fronts to establish the right balance between facilitating traffic and ensuring that activities continue to run smoothly.

The Government of Canada is contributing a third of the eligible funding for all three project components to a maximum of $43,666,667 under the National Infrastructure Component of the New Building Canada Fund. Of this amount, up to $27.2 million is available to fund the new container terminal. The remainder of the funding will be attributed to the project’s other two components.

“The Government of Canada recognizes that port infrastructure plays a key role in supporting economic growth. In addition to making the Port of Montréal considerably more competitive, productive and effective, this project will also help to support economic growth for Canadians in the years to come,” said  Garneau.