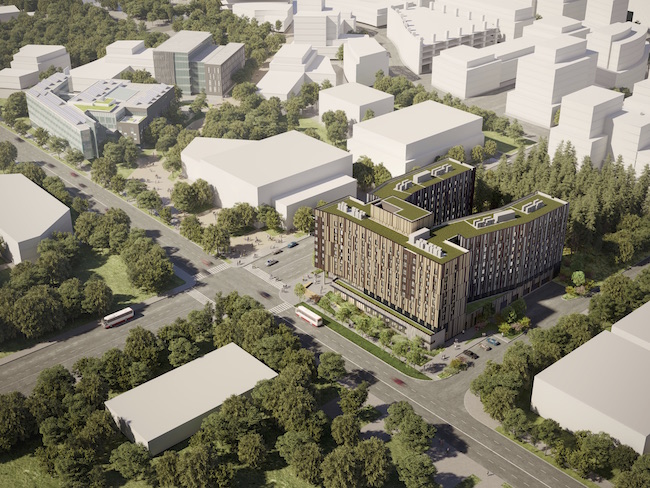 A rendering of the new residence at 3300 Ellesmere Road at the eastern edge of Toronto. PHOTO: Handel Architects

The University of Toronto has tapped Pomerleau for a major new construction project at its Scarborough campus.

The contractor said June 23 it has been awarded the design-bridge-build contract for a nine-storey, 746-bed residence hall at the university on the eastern edge of Toronto.

Work will get underway shortly, with delivery scheduled for the start of the fall semester 2023.

“Our focus on building innovative and sustainable buildings has never been stronger, and we are excited to work with the U of T Scarborough to create a safe, healthy and inspirational living environment for its students,” said Patrick Stiles, vice-president and regional manager at Pomerleau, in a release. “The future of construction is here, and we are very excited to be undertaking this flagship project for many generations to come in the GTA.”

The new residence includes both single and double bedrooms, a cafeteria, kitchen and a range of mixed-use spaces. A rooftop garden and terrace are also planned.

Handel Architects served as U of T Scarborough’s primary design architect for the new building, with support from Toronto-based Core Architects. IBI Group, MCW, RDH and EXP will also take part on behalf of Pomerleau as part of the design-bridge-build process. The financial terms of the contract were not disclosed.

Along with a focus on ensuring the new building is highly energy efficient once completed, the Saint-Georges, Que.-headquartered contractor said it is also employing a range of emerging technologies, such as building information modeling (BIM) to pare down on waste during the construction process. The contractor plans to unleash Spot, a dog-like robot built by Boston Dynamics, on-site to keep track of site progress and monitor health and safety.

Construction is scheduled to get underway on the east end of Toronto later this summer.