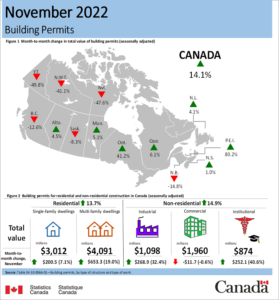 The total value of building permits in Canada reached $11 billion in November, reports Statistics Canada. That was a rise of 14.1 per cent. The growth came as a rebound after two consecutive months of losses, and was tied heavily to significant gains posted in Ontario.

The multi-unit component drove residential sector growth, where permit values reached $7.1 billion. Permits for multi-family dwellings were up 19 per cent thanks largely to 21 permits for new condominiums and apartments in Ontario with values over $10 million. The total number of planned dwelling units in Ontario grew 60% month over month, returning the province to historical averages reported over the past three years.

The single-family dwelling component advanced just over seven per cent following four consecutive monthly declines. Gains were posted in seven provinces. Despite the increase in value, the number of dwelling units were down for the sixth consecutive month.

Ontario played a major role in the growth of non-residential sector permits as well. The total permit value in the sector rose almost 15 per cent to reach $3.9 billion in November.

Permits in the institutional component were up 41 per cent, with much of that gain linked to a new courthouse planned for development in Toronto. That project is valued at just over $500 million.

The value of permits in the industrial component followed a strong October with a second consecutive healthy month, jumping 32.4 per cent thanks to projects like a $425 million manufacturing plant in Toronto.

The lone drop could be found for construction intentions in the commercial component, where permit values edged down a slight 0.6 per cent.