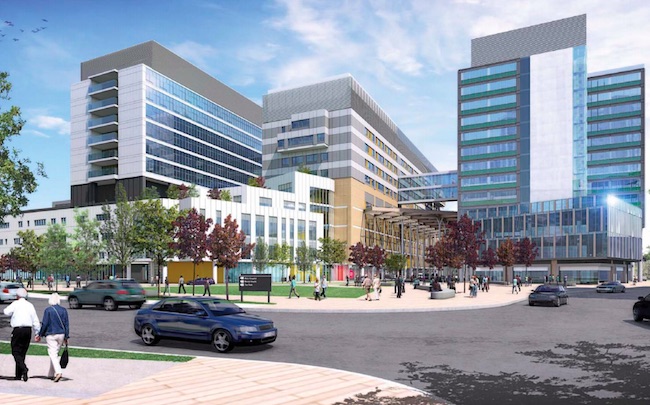 A rendering of the new hospital, expected to open in late 2026 in Vancouver. Further details on the construction timeline are expected to be available later this month. PHOTO: Providence Health Care

A team headed by PCL Construction has been picked to build the new St. Paul’s Hospital in Vancouver.

Providence Health Care announced its choice Feb. 9 after shortlisting two build teams to bid on the project in fall 2019. The final contract has yet to be signed, but the selection of the PCL team effectively caps a 20-month procurement period and years of preliminary planning.

The latest estimates for the new facility at 1002 Station St. in the False Creek Flats peg the total cost at $2.083 billion, up from $1.9 billion previously. The sprawling — at least relative to its densely packed surroundings — 18.4-acre site will let the hospital nearly double its current footprint.

The site of the existing St. Paul’s at 1081 Burrard St. was sold last summer for approximately $1 billion. The funds from the sale of the 125-year-old hospital will be reinvested into the new facility, though the current hospital will remain operational until its replacement opens.

Plans for the new hospital include 548 private inpatient rooms, an emergency department, an urgent care clinic and a long list of specialty services. The initial two phases of work cover construction of the hospital, as well as a clinical support and research centre for clinics, primary care, health care technology and other adjacent services. Future work at the site may also lead to construction of new community buildings, such as a mixed-use development and hotel.

Along with PCL, HDR Architecture Associates Inc. and Stantec Architecture Ltd. are included in the design-build team.

With financial close expected by the end of February, construction on the new hospital has been scheduled to start this summer. Work will last about five years. Providence Health said it expects to release more details once the construction contract is finalized, but pointed to late 2026 for completion.