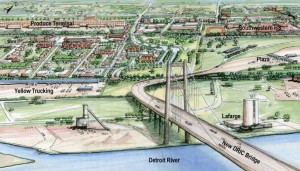 The Gordie Howe International Bridge is expected to be completed and in service in 2020. It will connect to the Herb Gray Parkway and Interstate 75

The Windsor-Detroit Bridge Authority (WDBA) has selected Parsons as the owner’s engineer for the Gordie Howe International Bridge Project. The bridge will connect Windsor, Ont. with Detroit, Mich.

The $61 million contract is the first WDBA has awarded for services related to the design-build phase of the project.

In its role, Parsons will support the owner – WDBA – through design review, providing technical advice and overseeing the construction activities of the private-sector partner through inspections, compliance reviews and audits.

Parsons will begin its work as owner’s engineer in April of this year – two months before WDBA announces its preferred proponent and begins final contractual negotiations. This intends to allow Parsons to start work as soon as the preferred proponent is selected.

“As we finalize our procurement process to select a private-sector partner to deliver the Gordie Howe International Bridge project it is important that we take steps now to prepare for the start of significant construction,” said André Juneau, interim CEO at WDBA.