Pair of hospitals put permits on a slide 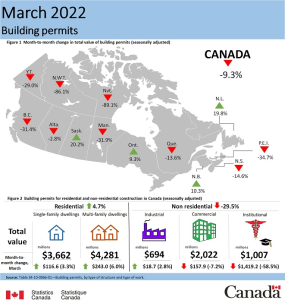 A sizeable drop in the non-residential construction sector created by a pair of large hospital permits issued in February has resulted in an overall dip in Canadian building permit values of nine per cent in March.

March values came in at $11.7 billion, despite having to weather a drop of almost 30 per cent in the non-residential segment, which experienced a record high the month before.

Digging through the numbers, the total value of building permits in the first quarter of 2022 was up more than five per cent from the fourth quarter of 2021, reaching $34.9 billion.

The non-residential sector hit a record high of $12.5 billion in the first quarter of 2022, an increase of almost 19 per cent, largely due to the 59 per cent spike in the institutional component, which saw two hospital permits issued in Vancouver and Quebec. Those two permits alone had a combined value of $1.9 billion. Gains were also felt in the industrial (15.3 per cent) and commercial (two per cent) components for the quarter.

Residentially, permits increased 4.7 per cent to $7.9 billion nationally in March. Construction intentions for single family homes were up 3.3 per cent, reaching the highest value since March 2021. The value of multi-family building permits rose six per cent nationally, helped by high-value projects like a $457-million permit for the Ravine condos in the city of Toronto.