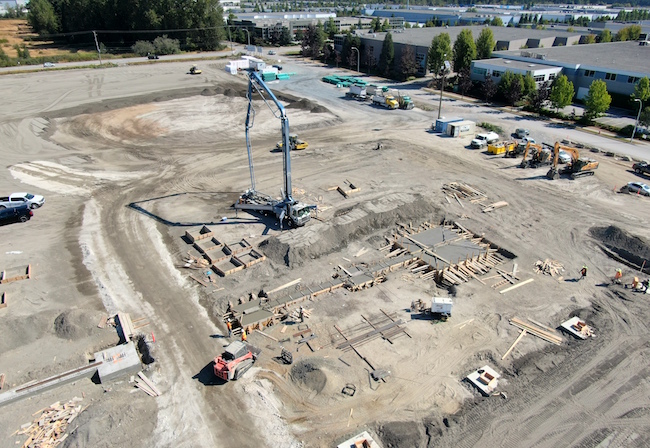 “Buy land, they’re not making it anymore,” is a quip that falls somewhat flat in most parts of Canada. But in the few regions it rings true, it rings very true.

Metro Vancouver is one of them.

“We’ve got mountains to the north, border to the south, water to the west. We’re just kind of pushing everything east,” Joshua Gaglardi, principal at Orion Construction, said.

The short supply of unused land creates plenty of challenges for residential and commercial projects, but in both segments, builders have the ability to go vertical. The industrial market isn’t so lucky.

“There’s an increasingly shrinking availability of industrial land in Metro Vancouver,” Gaglardi said, noting that many of the blank spaces left are complex lowland sites, often with creeks, trees that need to be retained, or other constraints.

Industrial development creeping east from Vancouver — into Burnaby, Surrey, Coquitlam and Langley — is nothing new, but pandemic has only exacerbated the issue. Demand for warehousing and logistics space continues to scale new heights as e-commerce surges. In its most recent quarterly report on the Greater Vancouver Area (GVA) industrial market, for instance, real estate firm Colliers said the market set a record low for vacancy and a record high for weighted average asking net rent. Amazon.com Inc. alone has snapped up one million sq. ft. of the region’s floor space in the past year, helping push down the vacancy rate to 0.7 per cent in the second quarter of 2021.

Though it can do little when it comes to generating more land, Orion has created a streamlined approach to making what land is available usable. Based in Surrey, it focuses on light industrial projects. Unlike many contractors in the region, which step in only after permitting and design, Gaglardi said the company’s design-build approach and its willingness to advise developers prior to purchasing potential sites has helped it build market share.

“We work with them straight from feasibility to initial concept drawings, to all the permitting, through to construction,” he said.

Gaglardi credits the integrated method it uses to tackle the work, as well as the company’s relationships with municipalities it works with on permitting, for its ability to quickly corner the market.

COVID-19 has made the past 18 months challenging, however. Prices on structural steel, for instance, Gaglardi said, have shot up as much as 30 per cent in the past six months, with other key inputs such as aluminum and rebar rising as well. Still, he said Orion has not been forced to put any projects on hold due to supply chain shortages, and the company’s trade base is currently indicating the price fluctuations will ease over the next year.

Moving forward, as the current roster of available industrial sites are filled in, Gaglardi expects many developers to continue sprawling east, while others are changing tack.

“We’re also seeing some creative approaches,” he said. “All of our new projects are introducing height to increase cubic capacity.”

Five years ago, warehouses were typically 26-foot or 28-foor clear. Now, most of the new logistics facilities Orion is putting up are 36-foot clear.

Redeveloping aging industrial sites is another option. Gaglardi said reduced parking requirements in many municipalities are freeing up new sites, and allowing for more floor space on the same land footprint.