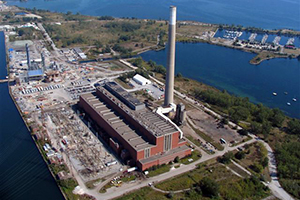 TORONTO—Critics are calling for an independent appraisal of a decommissioned Ontario Power Generation plant on Toronto’s waterfront after they say the site was sold for far less than it appears to be worth.

The Opposition New Democrats say something “smells fishy” about the sale of the Hearn Generating Station, which ceased to produce electricity in 1983 after more than 30 years in operation.

Ontario Power Generation announced Nov. 21 that it had sold the plant to its long-term tenant, Studios of America Limited Partnership, noting the film company exercised the right to purchase laid out in its lease.

The power company said Friday that the site—an industrial property that requires remediation—sold for roughly $16 million, which it said is the value set in an assessment two years ago.

The news came as a surprise to Toronto Mayor John Tory, who said he learned about it through the OPG’s press release.

Tory said the city was not consulted on the sale nor was it given an option to purchase the site.

“It’s a heritage building, it’s an important building in the context of our waterfront and so I can only hope that what unfolds from here will be respectful, again, of the city of Toronto’s waterfront,” the mayor said Thursday.

NDP legislator Peter Tabuns, whose riding includes the site, says nearby properties recently sold for hundreds of millions and even the need for a clean-up shouldn’t reduce the value that much.

Tabuns suggested the provincial government, who is OPG’s sole shareholder, may have played a role in the deal.

“I want a fully independent appraisal of this property done and released publicly before a single dollar is allowed to change hands,” he said in a statement.

A spokesman for the minister of energy said Friday the sale decision was made by the OPG board and the government was not involved, “although we believe the decision to sell the property is in the best interest of taxpayers.”

OPG would not comment on the allegations of political interference but said it deemed the property a surplus a few years ago and started negotiating the sale in 2016.

“This is a former coal generating station and the Hearn site is an industrial brownfield property and it requires remediation work and that impacts its market value,” spokesman Neal Kelly said.

The city was not consulted on the sale because it is a confidential commercial transaction, he said.