Ontario takes next step to build the Bradford Bypass. 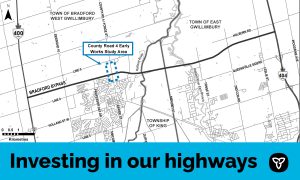 The Ontario government has issued an RFP to design and build a bridge crossing for the Bradford Bypass. (Image courtesy of the Ontario Ministry of Transportation.)

The Ontario government has issued a Request for Proposals (RFP) to design and build a bridge crossing for the Bradford Bypass, a new four-lane freeway that will connect Highway 400 and Highway 404 in Simcoe County and York Region.

“With Simcoe County and York Region expected to experience rapid growth over the next 10 to 20 years, investing in this new corridor is absolutely necessary if we are going to ease gridlock on Highway 400 and existing east-west local roads,” said Caroline Mulroney, the province’s minister of transportation.

Teams that were shortlisted during the Expression of Interest phase of the project are being invited to submit proposals to design and construct a grade separated bridge crossing for the future Bradford Bypass on Simcoe County Road 4 (Yonge Street) between 8th Line and 9th Line. The bridge will include the widening of County Road 4 from two to four lanes in this section.

“We are getting shovels in the ground to build critical transportation infrastructure, including highways, roads and bridges,” said Kinga Surma, Ontario’s minister of infrastructure.

A Preliminary Design and project specific assessment of environmental impacts in accordance with Ontario Regulation 697/21 for the project is currently underway and is expected to be completed by December 2022.