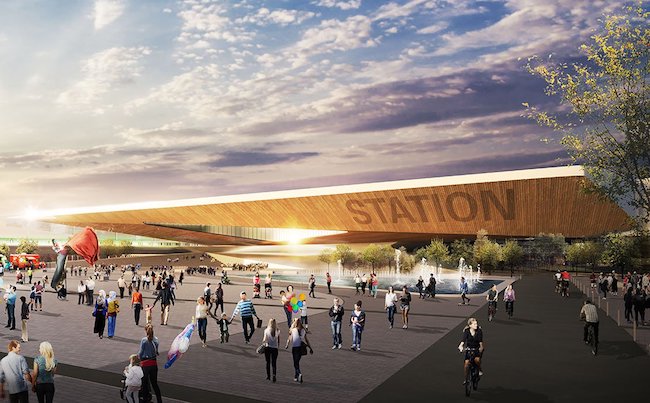 A rendering of the new station and development area in Etobicoke. PHOTO: Woodbine Entertainment

TORONTO—The Ontario government and transit agency Metrolinx have struck a deal with Woodbine Entertainment that will see the racetrack owner pick up the bill for a new Toronto train station.

The station, which will be located along Highway 27 at the north end of Etobicoke, is expected to cost between $75 million and $90 million to build. It will serve as a stop on GO Transit’s Kitchener line, which runs between Union Station in downtown Toronto and Kitchener. The new station will also replace the soon-to-close Etobicoke North stop that needs to be torn down to accommodate the transit agency’s expansion of its Highway 401 Rail Tunnel.

To build the station, Woodbine has tapped Mississauga-based EllisDon. The contractor will head design and construction for the transit project, as well as assist with financing.

Meanwhile, the entertainment company has major plans for the area around the new station.

“Bringing mass transit to the Woodbine property is a big part of a larger vision to develop and unlock the value of our land to create new revenue streams that will help grow and sustain the horse racing industry for decades, attract millions of visitors to our site annually, and serve the surrounding community,” Jim Lawson, the CEO of Woodbine Entertainment, said in a statement.

The company described the transit connection as one part of a wider project that will see it develop a major mixed-use community hub with residential, commercial and recreational space. A plan for a larger casino and new hotels are also in the works.