One week out: Final prep underway for CONEXPO, special care being taken for coronavirus 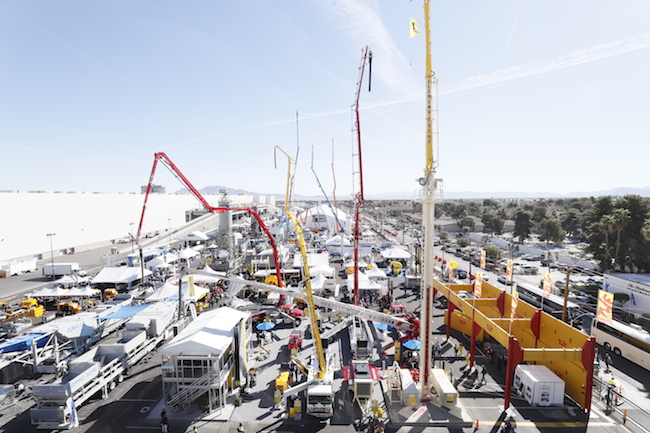 Thousands of new registrants signed up to attend CONEXPO-CON/AGG last week, as the approximately 2,500 exhibitors enter the final phase of preparation for the massive trade show that will kick off in Las Vegas March 10.

Organizers of the triennial show expect more than 130,000 people to attend the event that will showcase the latest advancements in construction.

“Registrations are on track to make CONEXPO-CON/AGG & IFPE 2020 one of the largest in show history,” Dana Wuesthoff, the show’s director, said in a release.

With excitement for the show building, Wuesthoff also acknowledged the heightening global concerns about coronavirus — officially COVID-19 — sharing what precautions organizers are taking. “We recognize news about COVID-19 is a concern and we want to be as transparent as possible about what we are doing to provide a safe and successful experience for everyone at the show.”

Sticking to guidelines laid out by the Centers for Disease Control, the show is placing an increased emphasis on hand sanitizers in all areas of the Las Vegas Convention Center, as well as bolstering its cleaning staff to focus on high-use areas, such as door handles and tables.

Shaking hands is also being discouraged on-site. “No Handshake” buttons and stickers will be distributed at the show, management said.

“We know how much a solid handshake can mean to engender trust and bonding between two people discussing major business decisions,” Wuesthoff said. “But in the interest of keeping everyone as healthy as possible, we want to impress upon everyone that it’s okay to replace that custom with something as simple as a thumbs-up, a wave, a fist or elbow bump, or even the exchange of mobile phone numbers.”

Along with taking these extra precautions, show organizers are encouraging anyone sick to stay home.

Despite the growing number of cases of the virus worldwide, no major exhibitors have pulled out of the show.