Our annual report showcases the largest contractors in Canada in the Top 40, as well as the Top Five Under 50 employees 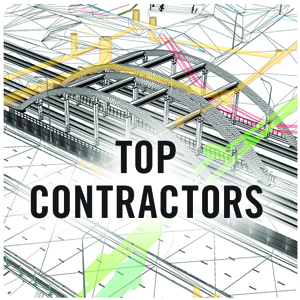 Canada’s Top Contractors had few free moments to stop for a breather last year as strong growth kept up in nearly all areas of the country. The past six months have shown how quickly the wind can change, but there’s no mistaking 2019 for anything but a strong year for Canadian construction — with a healthy majority of firms among the Top 40 adding to their revenue. Infrastructure funds continued to leave federal coffers and, as has been the case in recent years, expansion in big urban centres fueled strong investment in new commercial and residential developments.

Despite the current uncertainty, the industry remains confident in its ability to work through the pandemic and emerge from it stronger. New health measures are quickly becoming standard procedure on job sites, allowing crews to refocus on the tasks at hand.

I want to thank all of the contractors who were able to take the time during the challenging past few weeks to participate in our annual survey. We could not put together this valuable research without your contributions and insight.

Finally, a note on SNC-Lavalin Inc. For the past several years we’ve included the company in our Top 40, as it took on a range of construction and engineering work. Last summer, however, SNC-Lavalin announced plans to refocus entirely on engineering, cease bidding on new construction projects and run out its project backlog. Unsurprisingly, over the next several years, the company’s revenues from on-the-ground construction will decline to zero — though it does plan to continue taking on construction management and other such consulting work. To remain focused on contractors, we’ve elected to remove SNC-Lavalin from the Top 40.

You can also access the entire June issue, which includes this year’s Top Contractors report, here