Monthly SAAR of total housing starts declined by 11 per cent across Canada in October, despite year-over-year growth in major centres. 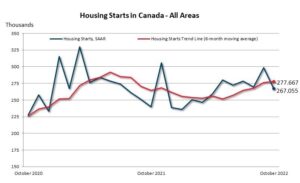 October’s standalone monthly Seasonally Adjusted Annual Rate (SAAR) of Canadian housing starts dipped to 267,055 units in October, a drop of 11 per cent from September’s high of 298,811 units, reports Canada Mortgage and Housing Corporation (CMHC). Looking at communities with populations over 10,000 residents, 21,100 starts were registered in October, a jump of 11 per cent over the 18,926 units started in October of 2021.

Also rising, says CMHC was the national trend. This six-month moving average of SAAR housing starts helps present a clearer picture of upcoming new housing supply as it mutes some of the considerable swings that can happen with monthly estimates. The trend hit 277,667 units in October, up a half-per-cent from 276,374 units in September.