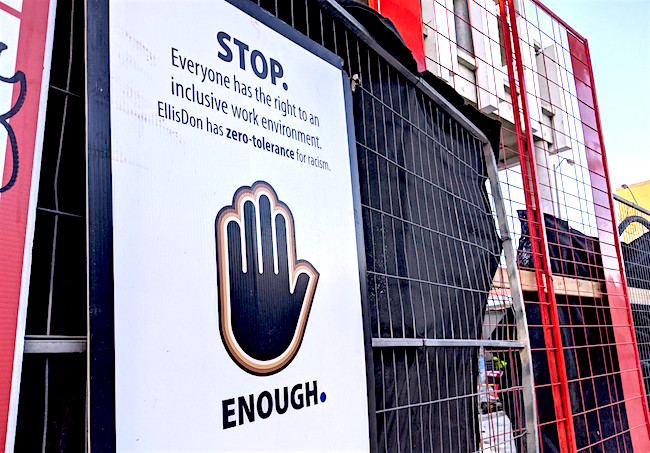 An anti-racism sign outside a Toronto construction site. Contractors such as EllisDon and industry groups have stepped up inclusivity efforts considerably since the first noose appeared last summer

Another noose has been found on a Toronto construction site, this time at the site of the Eglinton Crosstown light rail project’s Leaside Station.

It is the second found on one of the LRT project sites. Another was discovered last July on the city’s west end, leading to the swift resignation of member of Carpenters Local 27.

In a tweet March 11, Caroline Mulroney, Ontario’s minister of Transportation, acknowledged the hate symbol had been found at the site the previous night. She repeated previous statements from the government that racism and hate “in any shape or form” will not be tolerated. She said the province is working with transit agency Metrolinx and that a Toronto police investigation is underway.

Crosslinx Transit Solutions, a P3 team made up of ACS-Dragados, Aecon Group Inc., EllisDon and SNC-Lavalin Inc. are overseeing construction of the Eglinton Crosstown.

Among other contractors and industry groups, EllisDon has been quick to denounce the racist acts on job sites since the first noose was found on the builder’s Michael Garron Hospital site in East York last summer. It has also boosted anti-racism initiatives within the company. An arrest was made in December tied to one of the nooses found last June.

Throughout the wider industry, building groups are also focused on improving inclusivity though a range of awareness campaigns and training sessions.

In response to the latest incident, the Canadian Construction Association reiterated racism and discrimination have “no place” in construction.

“We are appalled to hear of another incident where nooses have been found on a construction site and we fully support the companies involved in identifying and prosecuting the guilty individual(s) for their actions,” the industry group said in a statement.