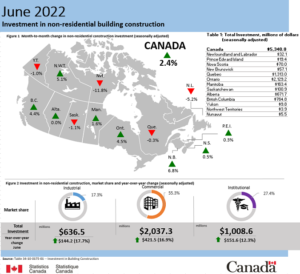 Gains in the non-residential sector helped nudge overall investment in building construction up 0.3 per cent, to $20.8 billion, in June. Statistics Canada reports most of the strength for the month came from Ontario, where increases were posted in all building components as the province rebounded from a weak May that had been impacted by construction strikes.

Advances across all components in the non-residential construction sector led to a jump of 2.4 per cent, as the sector reached $5.3 billion in June.

Commercial investment grew 2.7 per cent from May, hitting $3 billion. Ontario’s 4.1 per cent gain accounted for much of the growth. In May, strikes in Ontario pulled the segment down to its first dip in over a year, but with those issues now resolved, the commercial component made up for the temporary decline and continued its upward trend.

Investment in the industrial component also bumped up significantly, rising 3.7 per cent to $974 million, the highest monthly value increase since May 2020, or just after the pandemic-related shutdowns.

On the residential side, despite six provinces reporting growth, residential construction investment declined 0.4 per cent, to 15.5 billion, in June. Quebec posted the largest drop, at 6.7 per cent. This was the first decline in nine months for residential investment.

Single-family homes are continuing to show strength, however, and have outpaced multi-unit construction since the COVID-19 pandemic downturn. That component increased 0.7 per cent, to $8.6 billion, in June. Gains were posted in six provinces.

Over the course of the second quarter, the total value of investment in building construction rose 3.3 per cent to $62.3 billion. This is the third consecutive quarterly increase. Investment for residential buildings reached $46.4 billion, largely due to increased spending on multi-unit construction, while the non-residential sector rose 2.6 per cent, to $15.8 billion.

The commercial component, which contributed the most to the non-residential sector, gained 2.8 per cent, reaching $8.8 billion and posting its fifth consecutive quarter of growth. Institutional construction edged up a half-per-cent, to $4.2 billion, a sixth consecutive quarterly gain. And the industrial component rose 5.4 per cent, reaching $2.9 billion on the quarter.