Construction intentions were down 1.4 per cent in October on significant losses in the residential and institutional segments. 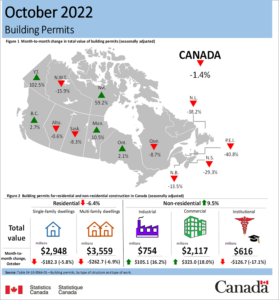 Double-digit gains in the commercial and industrial sectors were not enough to offset losses in the residential sector in October. As such, the total value of building permits in Canada declined 1.4 per cent to $10 billion.

The total permit value of the non-residential sector increased by 9.5 per cent in October, reaching $3.5 billion. Construction intentions in the commercial component increased sharply, jumping 18 per cent on the strength of multiple projects in Ontario with values over $20 million. In September, only one permit was reported above this level.

Building permits in the industrial component were also on the rise, increasing by 16.2 per cent, also largely due to Ontario, which reported a $114 million permit for a water and sewer project in Erin.

The institutional component continued to slow, dropping 17.1 per cent in October, following a 38.2 per cent decrease the previous month, reaching its lowest value since May 2020.

The value of residential permits declined more than six per cent for the month, coming in at $6.5 billion nationally. Similarly, the number of new residential units decreased 4.6 per cent, mainly due to single-family dwellings, which fell for the fifth consecutive month. The value of building permits in the multi-family component decreased almost seven per cent, with Ontario posting its second consecutive decline after reaching a peak in August.