Drop in single-family homes bringing overall investment in building construction down despite growth in ICI sectors. 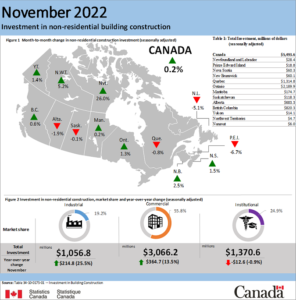 Overall investment in building construction was down in November, but not in the non-residential sector, where the three core components – industrial, commercial and institutional – combined to post a slim increase, reaching $5.5 billion. A significant drop in Alberta pushed the combined residential and non-residential figure to $20.4 billion in for the month, with the residential sector posting a two per cent drop to fall to $14.9 billion.

Ontario accounted for most of the non-residential growth as the province led the gains in each component.

The industrial component was up almost one per cent on the month, at $1.1 billion, and was up 25.5 per cent year over year as the component posted its twelfth consecutive monthly increase. At the subcomponent level, mining and agriculture buildings surpassed pre-pandemic levels, with 80 per cent growth over the previous 12 months. The factories subcomponent also saw considerable growth, with an increase of 34 per cent on an unadjusted basis since November 2021. Conversely, the transportation subcomponent was down 6.3 per cent year over year on an unadjusted basis.

Investment in residential building construction say a third consecutive decline as the single-family home component continued to fall. It was down 3.9 per cent, at $7.8 billion, with all provinces reporting declines. The drop brought the single-family component back down to levels last seen in December of 2021. Not all was running in reverse on the residential side, however, as the multi-unit component remained relatively unchanged to slightly positive, edging up to $7.1 billion on notable gains in Manitoba that helped offset declines in six provinces.