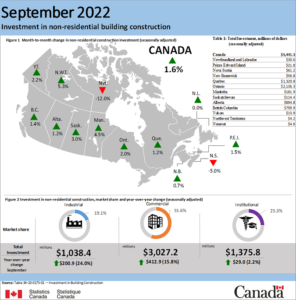 Overall investment in building construction was on the decline in September, maintaining a downward trend that kicked in from a peak in February, but the non-residential sector showed a bit of life, posting a gain of 1.6 per cent, reaching $5.4 billion for the month.

In its latest report, Statistics Canada indicated a loss of 0.6 per cent, to $20.9 billion, across all sectors in September. Most of the weakness was attributed to Quebec’s residential sector, where the multi-unit component had a fourth consecutive contraction, this time dropping 5.6 per cent.

Overall, eight provinces reported gains in non-residential construction, with Ontario leading the way in each component and posting a total Industrial, Commercial, Institutional (ICI) gain of two per cent.

Investment in the industrial segment was up almost three per cent for the month and is up 24 per cent year over year as it posted its tenth consecutive monthly increase. Commercial construction investment rose a little over one per cent, to $3 billion, in September. And institutional construction also saw a small bump, rising 1.6 per cent to reach $1.4 billion for the month. Once again, Ontario led the way as construction of a new elementary school in Hamilton and a post-secondary school in Toronto contributed to the gains.

Taking a quarterly look, StatCan indicated a fourth quarterly increase as the total value of investment in building construction advanced one per cent to $62.8 billion in the third quarter of 2022. The residential sector rose a little less than one per cent on gains in the multi-unit construction segment, while the non-residential sector posted a rise of just over two per cent to reach $16.1 billion on the quarter.

Most of the multi-unit residential growth was found in British Columbia, which was up almost 22 per cent on the quarter.

Compared to a year earlier, third-quarter non-residential construction investments were up 13.4 per cent. The industrial segment posted its largest quarterly growth since the third quarter of 2017, rising 6.8 per cent to $3 billion. Commercial construction investment increased 2.6 per cent to $9 billion – a sixth consecutive quarterly increase. Institutional construction missed making it positive figures all around dipping by 2.1 per cent at $4.1 billion. Most of the decline came from Quebec, which was down just shy of eight per cent.