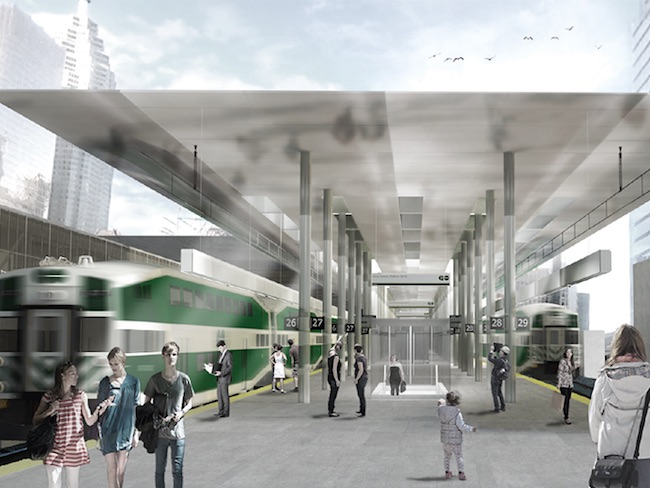 A rendering of a new platform at the south end of the existing station. PHOTO: Infrastructure Ontario

Nearly 10 years have gone by since construction crews began work on a major revamp of Toronto’s Union Station. With costs now inching toward the billion-dollar mark and the original completion deadline a distant memory, the city’s rail commuters have been forced to grin and bear it.

While construction on the city-led initiative to renovate the front end of the station is nearing completion, new projects to overhaul aging train platforms and expand the south side of Union mean there is no end in sight for work at Canada’s busiest rail hub.

Tied into GO Transit’s wider Regional Express Rail (RER) program, the job centres on expanding the station at its south end — with the ultimate goal of increasing passenger and train capacity. The build team will take on construction of new platforms covered by canopies, two new tracks and a new concourse level located below the platforms. A stormwater management system, among other key building features, is also included.

The work on the south end of the station is separate from another project that will see some of the station’s tracks and platform refurbished. Infrastructure Ontario issued a request for proposals for that job this May.

The latest project will extend work at Union well into the 2020s.

The first stage of the procurement process asks construction consortia interested in bidding on the project to come forward. The two crown-owned agencies will assess the make-up of the teams, weighing whether or not groups are capable of tackling the expansion before shortlisting the most qualified teams to prepare formal bids.

The province plans to use the alliance method to deliver the expansion. As the name implies, the model forces the build team to take a more collaborative approach to construction than conventional methods.

Teams have until mid-December to submit their credentials.