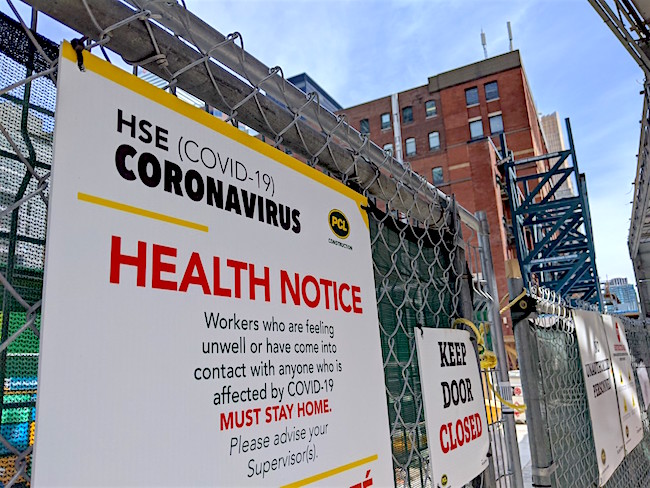 In more ways than one, it’s been a hectic few months at the Ontario General Contractors Association (OGCA).

With the industry group busy responding to the COVID-19 crisis, longtime president Clive Thurston has been inching toward retirement. After nearly 20 years at the helm of the OGCA, Thurston said the whirlwind of activity of the past three months is “quite something to go out on.”

“Will I miss the fight a little bit? Yes. But it is time to let others take up the mantle,” he said, adding that despite the immediate challenges stemming from the pandemic, the association, which represents members of Ontario’s ICI (industrial, commercial and institutional) sector, continues to grow and is stronger than it has ever been.

Giovanni Cautillo, most recently the executive director and COO for both the Greater Toronto Sewer and Watermain Contractors Association (GTSWCA) and the Ontario Sewer Watermain Construction Association (OSWCA), will be stepping in to replace Thurston as OGCA president.

“I hope to pick up the baton that passes to me now and basically run with it and carry the OGCA into the next millennium,” Cautillo said.

Prior to the senior management roles at the GTSWCA and OSWCA, Cautillo served eight years as the executive managing director of the Residential Framing Contractors’ Association. 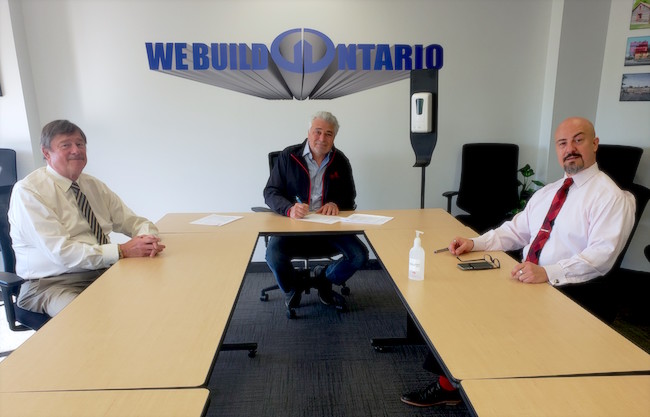 Like many in the industry, Cautillo got an early start in construction, helped along by a father who did not shy away from enlisting his six-year-old son’s help on-site.

“I remember I’d be sitting in my dad’s lap, reading the old school blueprints when they were actually blue,” Cautillo said.

When other kids went off to summer camp, Cautillo ended up on the job site. By the time he was nine he was behind the wheel of a three-on-the-tree forklift moving palettes of block for his father’s crew.

After getting a degree, it wasn’t long before Cautillo gravitated back to construction, gaining experience in the general contracting realm before jumping to the association side.

His predecessor at the OGCA has a family history in construction as well.

With a father in the industry, Thurston spent every summer working a range of jobs in the building sector as he progressed through school. Getting a look at different facets of the industry, “I got the bug,” he said.

His father, however, was not exactly enthusiastic about the idea. Advocating for a career in law or teaching, Thurston said it was a long time before his father came around, but eventually, the reservations disappeared. In fact, in a roundabout way, Thurston delivered on both the teaching and the law through his decades-long career in construction. He teaches regularly throughout the province and beyond, and regularly has friends needle him about practicing more construction law than any construction lawyer.

“I’m not a lawyer, but I spend an inordinate amount of time dealing with legal issues in construction,” Thurston said.

Though he is handing off the leadership role at the OGCA, Thurston plans to continue putting his knowledge of contract language and other key issues to work. He has agreed to stay on as an external consultant to the association for three years.

Among the range of accomplishments over the past two decades, Thurston said his work to create a more unified voice for the industry — embodied by the Construction Design Alliance of Ontario (CDAO) and Construction Employers Coalition (CEC) — ranks near the top of the list. He also pointed to his efforts to mend the relationship between GCs and the subtrades.

“Collaboration and communication were always what I tried to bring about, and I’m very proud of that,” he said.

Along with the camaraderie, Thurston admits, not altogether seriously, he will miss the lunches. “I was one of the old fashioned guys who still believe in lunches for getting things done,” he said.

Heading for a relatively active retirement — between consulting for the OGCA and finishing up the requirements to become a certified adjudicator under Ontario’s new dispute resolution framework — Thurston plans to head north to the retirement home he’s built in Bancroft, Ont.

Once the border reopens, Thurston and his wife are planning a road trip through the U.S., meandering their way to Arizona and back.

He’s not the only one awaiting a return to something resembling normal. With the supply chain disrupted, Ontario’s contractors are eagerly watching for the reopening of Canada’s borders and easing of other pandemic restrictions.

As the recovery slowly gets underway, Cautillo intends to keep the OGCA’s primary focus on safety.

“I plan on catapulting on that single-minded focus to serve the members through this pandemic and then in the post-COVID world,” he said. At the same time, he will be working on outreach as the new face of the organization and mapping out a firm plan to guide the association’s members through the uncertain times.

Keeping the lines of communication open between owners and their contractors will be one part of the effort.

“Under these circumstances I believe it has to be a shared responsibility because no one could have seen this coming,” Cautillo said. “Owners still need projects completed. There’s still deadlines, but they have to understand that those deadlines can’t be met if we have to social distance or we have to bring in a crew at a time.”

With so much still up in the air, but Cautillo anticipates it will be some time before construction returns to normal.

“I wish I knew,” he said. “I would love for a very expeditious remedy and that we could get back to business as usual, but I don’t see that. That’s why I think we need to come up with a firm plan for the next six to 12 months.”