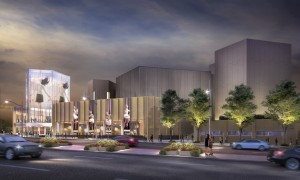 Renovations to the National Arts Centre in Ottawa are to be complete by July 1st 2017.

The National Arts Centre in Ottawa today marked the start of its architectural rejuvenation with a groundbreaking ceremony. The $110-million project is one of the largest capital investments by the Government of Canada to celebrate the country’s 150th anniversary. The grand opening will take place on July 1st 2017.

This landmark facility conceived in Canada’s Centennial year in 1967 displays a rigorous and robust geometric order in the Brutalist style that made it a fortress for the arts. The transformation will establish new transparency and connection with the city and enhance the NAC’s identity as the country’s premier destination for the performing arts.

A marquee tower designed to extend the geometry of the original architecture into the 21st-century will mark the new entrance and will project performances from the NAC stage. Public space for education, pre-concert gatherings and small concerts will occupy the new North Atrium. An upper level Lounge will take in views of Confederation Square and Parliament Hill. A transformed Fourth Stage, which serves as a community venue for music, will animate the NAC’s presence along Elgin Street. The renewed facility creates a crossroads open to the community for gathering at all times of the day.

“People have often remarked that it is unfortunate that the NAC turns its back to the city,” said Donald Schmitt, principal, Diamond Schmitt Architects. “Our design will change that. The NAC will finally face the city and its most important public space, Confederation Square.”

“As the NAC reaches towards its own 50th anniversary, we are thrilled that our audiences will be able to enjoy improved performance spaces, public areas for education and events and full accessibility for people with mobility challenges,” said Peter Herrndorf, president and CEO of the National Arts Centre. “More than 1.2 million visitors come to the NAC each year. Soon they will be able to enjoy a warm and inviting space that embraces the capital for the very first time.”

The National Arts Centre presents on average 1,300 performances a year in music, dance and theatre. All evening performances will continue as scheduled during the 18-month renovation period.