The Canadian Board for Harmonized Construction Codes is taking over responsibility for the development of Canada's national model codes. 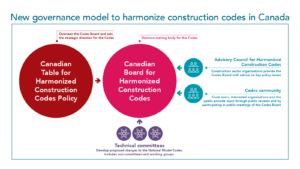 A new organization has been created to support the adoption of harmonized construction codes in Canada. The Canadian Board for Harmonized Construction Codes (CBHCC) is assuming responsibility for the development of Canada’s national model codes, replacing the Canadian Commission on Building and Fire Codes, which had been responsible for managing the national code development system since 1991.

According to a media announcement from the CBHCC, the change is part of a broader set of governance changes that includes the dissolution of the Provincial/Territorial Advisory Committee on Codes (PTPACC), which previously advised on policy matters. The new governance model will also include an Advisory Council for Harmonized Construction Codes consisting of members from industry, the regulatory community and other interested organizations. This council will provide policy advice to the CBHCC.

It is expected that the broader code community, including code users, interested organizations and members of the public, will continue to participate in the code development process by attending open meetings and providing feedback during public reviews of proposed code changes.

“In developing the new governance model, it was important that we maintain strong engagement with industry and the code community, which have been hallmarks of the Canadian system,” said Joe Rogers, vice-chair of PTPACC and chair of the transition efforts. “Also, the development of the national model codes would not be possible without the volunteers who serve on technical committees, and who will continue to develop changes on these committees for the 2025 codes.”

CBHCC says the new code system governance approach was developed collaboratively over the past two years by provincial, territorial and federal officials under the Construction Codes Reconciliation Agreement. Endorsed by provincial, territorial, and federal jurisdictions, the agreement includes commitments to reducing variations in technical requirements between codes for more timely adoption, and for a transformed national code development system that meets the needs of all jurisdictions.

The National Research Council of Canada will continue to publish the codes, and provide administrative, technical, and policy support to the code development system. The ongoing public review of proposed changes to the 2020 editions of the national model codes will continue until December 23.

In Canada, provincial and territorial governments have the constitutional au-thority to enact legislation that regulates building design and construction within their jurisdictions to meet their specific needs. For the national model codes to become law, they must be adopted by a province, territory, or other authority having jurisdiction.

Current provincial and territorial building, fire, plumbing and energy regulations continue to remain in effect. Design and construction officials are ad-vised to consult the relevant provincial or territorial government to find out which regulations apply in their location.


Related Stories
Manitoba to adopt 2020 codes ahead of schedule
2020 National Model Codes now available
Some 600 changes introduced in the 2015 editions of the National Building, Fire and Plumbing Codes
Amendments made to the Alberta Safety Codes Act