Nearly derailed by pandemic, $600M REM stop at Montreal airport gets back on track 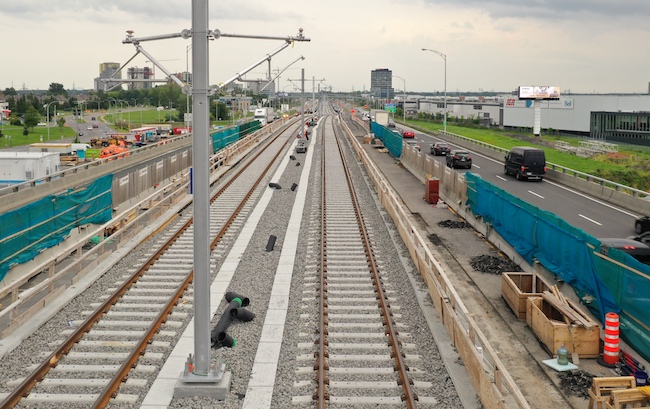 Earlier construction on the REM network. The new station at the Montreal airport is expected to open in 2024. PHOTO: CDPQ Infra

Backing from the federal and Quebec governments has put the Réseau express métropolitain’s (REM) stop at the Montréal-Trudeau International Airport (YUL) back on track.

The $600 million stop has been in doubt since last summer, when Aéroports de Montréal said it was halting all non-essential construction at the airport as a result of far fewer flyers and less revenue. This included a pause to work on the new REM station, early works for which had begun in 2019. The airport authority said it would continue with planning activities for the station as it worked with governments on loans to finance the project.

$400 million in loans and $100 million in funding have now come through, the federal and Quebec governments announced April 15.

The Canada Infrastructure Bank is providing a loan of up to $300 million — in addition to its $1.3 billion in earlier support for the REM; Quebec, via Investissement Québec, is offering a loan of $100 million; and Transport Canada will invest $100 million in the project as part of its program to support large airports. The additional $100 million — separate from the loans — is coming from Aéroports de Montréal.

Philippe Rainville, the airport authority’s president and CEO, said the support is “essential” for the construction of the station.

“For Aéroports de Montréal, it was unimaginable to pass up on a project that will provide a reliable and sustainable public transit option serving the Montréal–Trudeau International Airport, as is the case in all major cities around the world,” he said in a release. “The airport station is highly strategic for the REM network since it will not only enhance Montréal’s competitiveness but also ensure the attractiveness of the airport for passengers and employees in the community.”

The $6.3 billion REM system, which will have 26 stops, has been under construction since 2018. The first segment of the network was expected to open in 2021, but delays tied to the pandemic, as well as a serious tunnel issue through one section of the project, disclosed last fall pushed the opening back into 2022.

The airport spur has also been delayed. CDPQ Infra, the driving force behind the transit project, said in November the link to YUL expected to open no sooner than 2024.