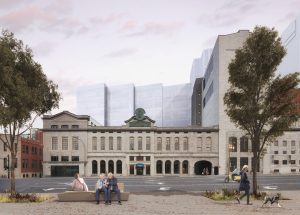 Preliminary designs have been unveiled by the consortium heading up the redevelopment project of the former Molson Brewery site in Montreal. Selection Group, Mononi and Fonds immobilier de solidarite FTQ revealed plans to make the legacy and heritage of the Ilot des Voltigeurs, the oldest part of the site, the central theme of the first phase of the nearly 6-million-square-foot historic mixed-use project in downtown Montreal.

Several iconic elements of the former brewery, including the clock, the Molson sign and the chimney, as well as the new Molson Coors’ administrative offices, will be an integral part of the development concept.

The consortium says that it aims to create a dynamic, innovative and diversified living environment while ensuring the sustainability of the existing Ilot des Voltigeurs built environment. The proposed concept seeks to open the site to the surrounding areas and create views toward the St. Lawrence River while preserving a cascading silhouette around the highest point, the iconic Molson Tower.

To generate vibrant, mixed-use activity, the consortium proposes to create quality pedestrian-friendly spaces that will be accessible to all Montrealers and to incorporate heritage and archeological remnants. 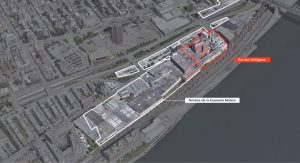 Since acquiring the site in 2019, the consortium has conducted a thorough analysis of the land, guided by the ambition to revive the identity of the former Molson Brewery’s original site, the Ilot des Voltigeurs, along with its multiple historical strata, as well as enhance the Montreal industrial heritage site.

According to the consortium, the entire site of the former brewery has potential to incorporate up to 6,000 residential units as well as more than 1 million square feet of commercial and office space. Plans would also include a civic area incorporating the lands belonging to the Societe d’habitation et de developpement de Montreal. 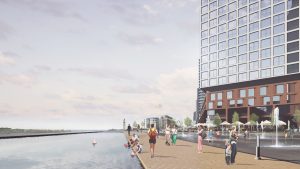 “Selection Group is honoured to be contributing to the design of a truly innovative living environment surrounding this Quebec industrial gem by building nearly 6,000 residential units,” stated Real Bouclin, founding president and CEO of Selection Group. “We want to give Montrealers a vibrant full-service neighbourhood that combines quality of life and environmental consciousness. We will ensure that this project will be exemplary and incorporates the unique characteristics of Montreal and Molson’s rich history.”

To assist with the planning process, the consortium worked with several experts, including the urban planning consultancy BC2, Sid Lee Architecture, the archeology firm Arkeos and architect Luce Lafontaine, a consultant in the conservation of built heritage, and consulted close to 50 organizations in the area to identify the community’s needs and concerns. 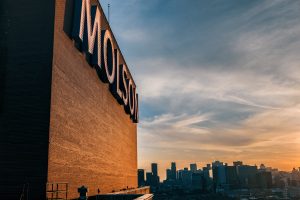 Over the past two years each Ilot des Voltigeurs building was assessed on various heritage criteria, including historical, architectural, social and usage values.

The redevelopment concept was presented to the Ville-Marie borough’s urban planning advisory committee last month, receiving a positive response, so the consortium is continuing its efforts aimed at developing the final project for the entire site.

To prepare the area and make room for public spaces on the ground, the silos on the site will be taken down over the coming weeks. Two of them, including the oldest one that dates back to 1973, will be preserved and featured in the project.