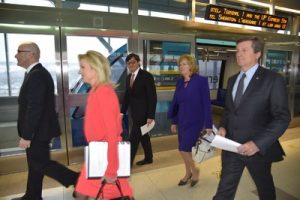 The Minister and Mayors participated in a briefing on the study, following which they spoke to media about the benefits to the region. The study confirmed that even if the airport did not exist, the area around Toronto Pearson would still be the logical place for a “Union Station West.”

“This opportunity is about more than just getting people to and from the airport; it is about generating a host of benefits for people living and working in the Greater Toronto Hamilton Area. This starts with reduced congestion on the roads around the airport, resulting in more efficient movement of people and goods. The end result would be a more economically competitive region, and one that is better positioned to unlock the significant growth opportunities that the future holds,” said Howard Eng, president and chief executive officer, Greater Toronto Airports Authority.

Located between three municipalities, four major highways and a number of planned and existing transit lines, Toronto Pearson’s location has the unique ability to connect the surrounding region. It’s also situated to effectively serve the transit needs of the West GTHA and those travelling along the ‘Northern Arc,’ while also offering a strategic link to the Toronto-Waterloo Region Corridor, which travels through other important economic areas in the GTHA West, including Brampton and Mississauga. Commuters trying to get around Toronto Pearson, as well as the daily one million trips generated within the Airport Employment Zone, the second largest concentration of jobs in the country, means that a regional transit centre in the area would enable the bundling of trips, increasing the frequency of transit services.

The GTAA will be publishing the full findings in coming months.