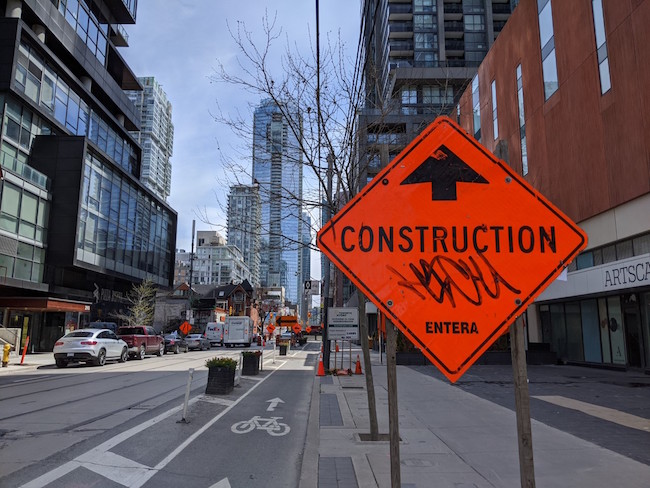 Ontario’s largest municipalities are asking the federal and provincial governments to provide an immediate funding boost for infrastructure projects, saying cities need the help to stimulate economic recovery from the COVID-19 pandemic.

“Municipalities are ready to go,” said Guthrie. “Help us out by putting shovels in the ground and putting people back to work.”

Guthrie said he was encouraged by the meeting.

“They do recognize the importance of municipalities and the role that we’re going to play,” said Guthrie. “The only thing that we’re stressing with them is that they really remove the hurdles and the barriers to get the money to flow down to the municipalities as quickly as possible.”

Pandemic restrictions effectively shortened the construction season in Ontario, said Guthrie. He also noted that expenses have gone up since budgets for this year were drafted in 2019, before COVID-19 arrived.

Many municipal infrastructure projects also need to be redesigned to accommodate things like hands-free paper towel dispensers or door openers to help slow the spread of COVID-19.

The federal infrastructure minister’s office did not provide comment on the municipalities’ call.

Infrastructure Ontario, a Crown organization, said it recently issued a report that indicated there were 40 public-private projects valued at more than $60 billion.

“The update was an important affirmation of the Government of Ontario’s historic commitment to P3s and public infrastructure generally, particularly in the midst of managing the unprecedented challenge of COVID-19,” said incoming president and CEO Michael Lindsay.

Guthrie, however, said those projects were provincial and not municipal.

While the province indicated its infrastructure spending is on-track, independent legislator Jim Wilson said he believes Ontario is quietly pulling back on spending because of the pandemic.

Wilson has been pushing the government to build a new hospital in Collingwood, Ont., which he represents. The 60-year-old facility is badly in need of upgrading, land has been donated, and a highway connection has already been built to the potential site, he said.

But Wilson said after receiving some positive signals from the government, recently Ontario’s health minister, Christine Elliott, has begun to sound more cautious about the prospects of the project, which it has not formally committed to.

“I think what she was trying to tell me was that the purse strings are especially tight now in lieu of COVID,” he said.

Ontario’s construction industry is already starting to feel the negative effects of the province’s municipalities slowing down their infrastructure projects.

The Residential and Civil Construction Alliance of Ontario did a survey of 300 of its members, including 200 industrial, commercial and institutional contractors as well as 100 civil and engineering contractors.

That survey found that 61 per cent of civil and engineering contractors who responded are anticipating revenue declines in 2020, compared to 2019, and 25 per cent report they will need government support to stay afloat. Fifty-six per cent indicate there have been fewer municipal projects available to bid on since July 1.

“Our members came into the year with a good backlog of work and that backlog has been eaten away,” said RCCAO board chair Peter Smith, who is also the executive director of the Heavy Construction Association of Toronto.

“Some of them are at the point where they have almost no work ahead of them in the near future and they’re going to be laying people off very early and for a longer period of time.”

Smith also said that construction costs have gone up during the pandemic, as contractors have to purchase personal protective equipment for workers, create more washroom space, and provide hand sanitizer.

—With files from Shawn Jeffords