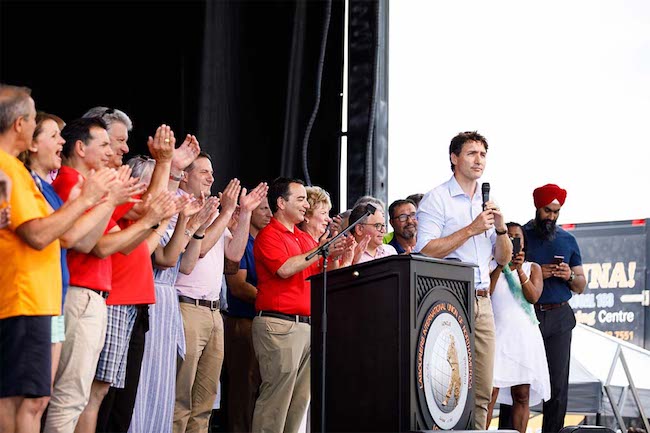 Trudeau speaking at a LiUNA 183 event last month. The prime minister has been unapologetic about his role in the SNC-Lavalin affair, claiming he was standing up for jobs. PHOTO: Adam Scotti/PMO

OTTAWA—A new poll suggests a scathing ethics report on Prime Minister Justin Trudeau’s handling of the SNC-Lavalin affair hasn’t so far hurt the Liberals’ chances of re-election this fall — and it hasn’t helped the Conservatives.

Indeed, the Leger poll suggests the two parties were locked in a dead heat, with the support of 33 per cent of voters, as they jockey for position at the starting gate for the Oct. 21 vote.

Liberal support was unchanged from last month, despite last week’s damning report from federal ethics commissioner Mario Dion, who concluded that Trudeau violated the Conflict of Interest Act by pressuring his former attorney general to halt a criminal prosecution of SNC-Lavalin.

Conservative support was down three percentage points from last month, despite the party’s best efforts to re-ignite public outrage over the SNC affair, which propelled the Tories into a commanding 13-point lead over the Grits at the height of the controversy last April.

The poll put support for the Green party at 13 per cent, up one point and ahead of the NDP at 11 per cent. Maxime Bernier’s fledgling People’s Party of Canada stood at four per cent.

The online survey of 1,535 eligible voters was conducted Aug. 16-19 for The Canadian Press and weighted to reflect the makeup of Canada’s population. It cannot be assigned a margin of error because internet-based polls are not considered random samples.

Leger executive vice-president Christian Bourque said the latest results suggest voters have largely put the SNC-Lavalin affair behind them and moved on to issues that affect them more directly — at least for now.

The two main parties are back in a “neck-and-neck race,” which is where things stood in February before the SNC controversy rocked the Liberal government, costing Trudeau two cabinet ministers, his most trusted aide and the country’s top public servant.

“I think that those who changed their mind on the PM and turned their backs on him did that in the spring already,” Bourque said in an interview.

But he said other Canadians appear to be fatigued with the issue and may be thinking “regardless of what I think of the behaviour of the PM, at the end of the day how does this change my life and that of my children, which is nil.”

Still, Bourque warned that “doesn’t mean that it won’t come back to haunt the prime minister” during the campaign, particularly should the RCMP decide to investigate, as Conservative Leader Andrew Scheer has repeatedly pressed the Mounties to do.

The Conservatives and New Democrats will continue trying to revive the controversy today at a meeting of the House of Commons ethics committee, where they’ll move to invite Dion, Trudeau and others to testify about the ethics report.

However, the Liberals hold a majority on the committee and are likely to block the bid to magnify the report just a couple of weeks before Trudeau officially fires the starting gun for the election.

The poll put the Liberals back into a solid lead in the Atlantic provinces, Quebec, Ontario and British Columbia. The Conservatives enjoyed a commanding lead in Alberta and Manitoba/Saskatchewan, with 55 per cent support in both regions.

The Liberals had the advantage in the two most populous provinces, where more than half of the country’s 338 seats will be up for grabs.

In Ontario, home to more than one-third of the seats, the Conservatives appear to be suffering a “spillover effect” from the unpopularity of Doug Ford’s provincial Progressive Conservative government, Bourque said. The Liberals enjoyed the support of 38 per cent of Ontarians, compared to the Conservatives’ 30 per cent, the Green’s 14 per cent, the NDP’s 13 per cent and the People’s party’s three per cent.

In Quebec, home to SNC-Lavalin, the Liberals stood at 34 per cent, compared to the Tories’ 27, the Bloc Quebecois’ 18, the Greens’ nine, the NDP’s eight and the People’s party’s four per cent.

Trudeau has acknowledged that he wanted Wilson-Raybould to reconsider her refusal to overturn a decision by the director of public prosecutions, who decided last fall not to invite the Montreal-based engineering and construction giant to negotiate a remediation agreement. Such an agreement would have allowed the company to avoid the risk of a criminal conviction, which would result in it being barred from federal contracts for 10 years.

While he has taken full responsibility for the mistakes that were made, Trudeau has refused to apologize. He has insisted that he was only standing up for the interests of SNC-Lavalin’s 9,000 employees, pensioners and suppliers, who stood to be negatively affected by the potentially crippling cost of a conviction.

Scheer maintains Dion’s report suggests the prime minister’s conduct went beyond a violation of ethics law and warrants a criminal investigation into possible obstruction of justice.

Wilson-Raybould resigned from cabinet over the affair in late February, followed shortly by cabinet ally Jane Philpott. Both women were subsequently booted out of the Liberal caucus and are running for re-election as Independent candidates.