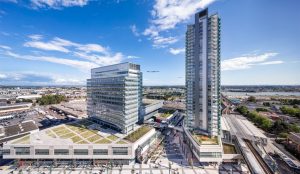 “We are honoured to have worked for clients who envisioned these exemplary projects,” said Peter Hrdlitschka, president, Ledcor Construction. “Marine Gateway and West Don Lands are world-class developments that were built to enrich local communities. The collaboration and teamwork between developers, designers, and other members of the project team were remarkable on both of these multifaceted projects.”