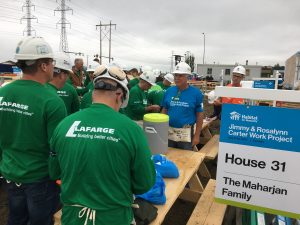 In celebration of Canada’s 150th anniversary, Lafarge Canada Inc. became a Gold sponsor of Habitat for Humanity Canada’s biggest build project ever. Habitat for Humanity’s 34th Jimmy and Rosalynn Carter Work Project took place in every province and territory across Canada with the goal to collectively build 150 homes to mark Canada’s 150th anniversary of Confederation. Former U.S. President Jimmy Carter and his wife Rosalynn, visited Canada from July 9-14, 2017, focusing their efforts in Edmonton and Winnipeg.

Habitat Canada has a long history of creating affordable housing opportunities. People living in Habitat homes not only help to build their own houses, they also pay affordable mortgages. Habitat for Humanity’s innovative approach helps working families on a new path to better, affordable living conditions that lead to improved health and stronger childhood development, as well as a decrease in reliance on food banks.

“Lafarge is proud to continue its work building better cities and communities by sponsoring the Jimmy and Rosalynn Carter Work Project. We are confident that our donation of ready-mix concrete and concrete paving will add to the sustainability of the Carter Place development in Edmonton which will house 58 families. Concrete will provide a safe and long-standing foundation for the homes as well as a highly durable pavement which will minimize maintenance requirements,” said Bruce Willmer, vice president and general manager for Lafarge in Edmonton. “We support Habitat for Humanity Canada’s important work because Lafarge believes that everyone in Canada has the right to a safe, affordable and decent place to live.”

In addition to supporting Habitat’s Carter Work Project, Lafarge has supported Habitat throughout Canada with donated materials and volunteer time for some 20 years. Of note, are the first NetZero energy precast concrete homes in North America, which Lafarge built to benefit Habitat for Humanity Edmonton. See: https://www.youtube.com/watch?v=Yrg292dwSTA

Since 1984, President and Mrs. Carter have traveled around the world with Habitat, to build and improve homes. Their time and effort helps to raise awareness of the critical need for affordable home ownership around the world. Inspiring millions over the last three decades, President and Mrs. Carter have worked alongside nearly 100,000 volunteers in 14 countries to build, renovate and repair more than 4,000 homes