Investment in building construction on the rise 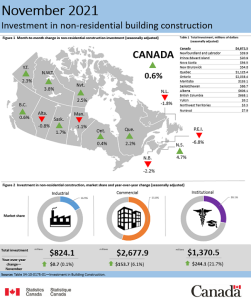 In its latest report, Statistics Canada is showing a rise of 1.2 per cent in building construction investment, hitting $18 billion in November. Every component showed growth, aside from industrial construction.

Multi-unit construction helped the residential figures as the segment grew 2.4 per cent, to $6.0 billion. Single-family home investment increased just under one per cent, to $7.1 billion.

On the whole, residential construction investment rose 1.5 per cent to $13.1 billion in November.

In the non-residential construction sector, investment edged up 0.6 per cent in November to $4.9 billion.

Investment in the institutional component was up 1.4 per cent, reaching $1.4 billion. Quebec posted the largest gain, at almost five per cent, which largely offset the declines reported in seven provinces.

Industrial construction was a softer area, declining 0.7 per cent, to $824 million. Lending to the decline were Ontario (-1.6 per cent) and Manitoba (-6.8 per cent). Conversely, Nova Scotia saw strong gains, up almost 15 per cent.