Growth in residential and the non-residential sectors keep upward trend in investment in building construction rolling. 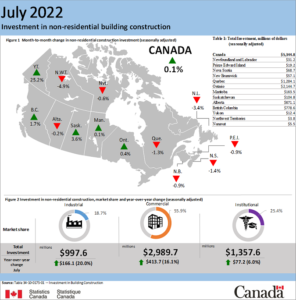 Statistics Canada reports that investment in building construction continued on the upward trend started in October 2021, rising almost one per cent this past July to hit $21 billion. Both the residential and the non-residential sectors showed increases.

Investment in non-residential construction nudged up 0.1 per cent to $5.3 billion in July, and came in ahead of July 2021, although some segments were down from June of 2022.

Commercial investment was up a half per cent at $3 billion for the month, cooling down after posting strong gains in June. Notable growth for the component mainly came from multiple projects in Vancouver.

At the subcomponent level, new warehouse construction contributed significantly to the growth. Warehouses have increased of 42 per cent on an unadjusted basis since March 2021, coinciding with a strong growth in e-commerce and the need for large e-commerce companies to store goods locally for rapid delivery. Conversely, investment in new office buildings, after a temporary bounce back in June 2020, has been on a downward trend ever since, as the work-from-home model became more prevalent and the number of unoccupied offices across Canada continued to increase.

Investment in the industrial component advanced a little over two per cent, reaching $1billion in July, with gains in seven provinces. Institutional construction dipped 2.3 for the month, coming in at $1.4 billion, the largest decline for the component since April 2020.

Investment in residential building construction advanced by one per cent to $15.7 billion in July. Single-family home investment nudged up to $8.6 billion and has remained relatively stable over the five months ending in July.