Both residential and non-residential sectors on the rise in February. 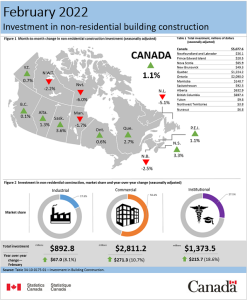 According to data compiled by Statistics Canada, investment in building construction increased four per cent in February, reaching $20 billion for the first time. Most provinces reported gains, with Quebec accounting for over half of the increase.

The non-residential sector was on the rise for an eighth straight month in February, increasing 1.1 per cent to $5.1 billion. Commercial investment reached $2.8 billion; the institutional component was almost unchanged, inching up to $1.4 billion; and industrial construction rose almost three per cent to $893 million.