Infrastructure and other non-residential capital spending continue to rise

Investment in infrastructure, buildings, machinery and equipment expected to increase through 2022. 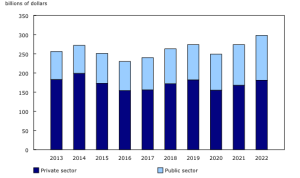 Expectations of record-high capital investments by the public sector, along with strong increases in the private sector, will pace capital expenditures on non-residential construction and machinery and equipment to a rise of almost nine per cent in 2022, says Statistics Canada.

The government agency anticipates seeing investment hit the $298.2-billion mark in 2022; a strong follow-up to the 10.4 per cent increase experienced in 2021. Public sector investment is expected to account for $116.8 billion of that figure, with the private sector anticipated to land at $181.4 billion, just shy of 2019 figures.

Over the course of the pandemic, the public sector’s share of capital spending on non-residential tangible assets increased from about one-third to almost 40 per cent in 2021 and 2022.

Public sector increases are expected to be paced by local, municipal and regional public administrations spending on non-residential buildings and other structures. In Quebec, this subsector anticipates increasing capital outlays by 65.6 per cent in 2022.

If intentions are realized, capital spending on publicly owned assets in transportation and warehousing industries will be triple the amount invested in 2016.

Public transit projects, mostly in the Toronto area, account for almost all of the anticipated increase in 2022. Private and public organizations in the transit and ground passenger transportation subsector are expected to boost capital spending by 18.5 per cent this year, after increasing by 26 per cent last year.

In British Columbia, capital expenditures in the subsector are expected to increase by 96.4 per cent with the start of tunnelling on the $2.8-billion Broadway SkyTrain Extension project.

Record-high capital spending is also expected in the health care and social assistance sector. In 2020, investments increased by more than 20 per cent, reaching $11.1 billion. This rose to $12.1 billion in 2021.

While hospitals accounted for most of the increase in spending in 2020, the nursing and residential care facilities subsector and the ambulatory health care services subsector were the focus of growth in 2021, increasing 32.2 per cent and 22.5 per cent, respectively.

In British Columbia, the province announced $7.8 billion in capital spending on infrastructure in the health sector over the 2021/2022 to 2023/2024 fiscal years, including construction of the $2.2-billion St. Paul’s Hospital in Vancouver as well as several other major hospital projects.

Major projects in clean energy are also contributing to increases in capital spending in several provinces and territories in 2021 and 2022.

In Prince Edward Island, the only province that saw increased capital spending in 2020 despite the pandemic, spending growth should continue into 2022 to reach $871.7 million. Among the projects in that province, site preparations are underway at the $68-million Summerside Sunbank solar farm and battery storage project.

In New Brunswick, the largest increase in non-residential capital for 2022 is anticipated in the utilities sector. In October, NB Power announced it is developing the province’s first long-duration energy storage project in collaboration with Malta Inc.

In Quebec, a number of major projects in clean energy are expected to contribute to a 12 per cent rise in non-residential capital investments in 2022. Construction of the $600-million Apuiat Wind Farm is expected to begin in 2022, and the Canadian and Quebec governments announced a joint investment of over $230 million in the $875-million Varennes Carbon Recycling biofuel project.

In Alberta, several major wind and solar power projects are under construction or will begin construction in 2022. In that province, the utilities sector was the largest contributor to the increase recorded in non-residential capital expenditures in 2021.

In the private sector, manufacturers are anticipating investments of $17 billion in machinery and equipment in 2022, surpassing the level achieved in 2019.

While labour shortages are expected to lead to increased demand for new technologies such as robots and automation, these shortages along with supply disruptions may nevertheless lead to a short-term dampening in capital spending intentions for machinery and equipment.