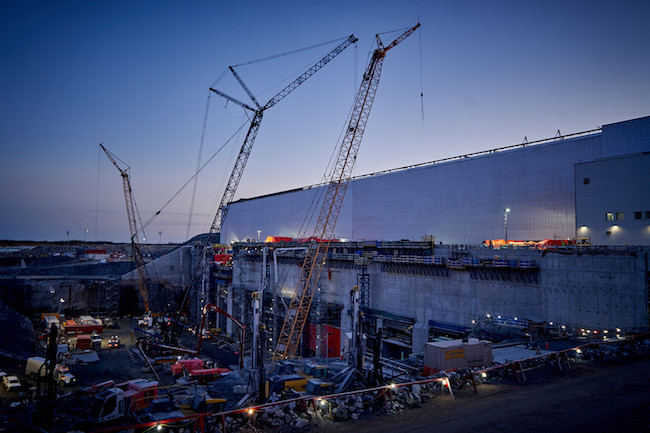 SPLIT LAKE, Man.—Members of northern Manitoba First Nations who are worried about the spread of COVID-19 say they will maintain blockades set up at the entrance to a hydroelectric construction site despite a court injunction.

“Is life more important than a job? If that virus comes into our area and people start getting sick, they won’t be able to work,” Tataskweyak Cree Nation band councillor Nathan Neckoway said May 19.

“There are people dying from this virus.”

Manitoba’s Court of Queen’s Bench issued the injunction Monday ordering the removal of the blockade to the Keeyask Generation Station construction site, about 725 kilometres northeast of Winnipeg on the lower Nelson River.

Scott Powell, Manitoba Hydro’s director of corporate communications, said the injunction proves the Crown corporation’s plan to resume regular work rotations is safe for workers and neighbouring communities. More than 500 employees and contractors have been at the site for eight weeks and Powell said they need to be rotated out.

“A blockade shutting down construction on the project will cause delays and cause tens of millions of dollars of unnecessary costs for our customers, plus the loss of employment for hundreds of workers,” Powell said in a release Tuesday.

He added the plan was endorsed by Dr. Brent Roussin, the province’s chief public health officer.

Neckoway said those same restrictions should be enforced for those entering the Keeyask site, especially since many of the workers are coming from regions across Canada hit hard by the pandemic, such as Quebec and Ontario.

The area so far has no cases of COVID-19, and Neckoway said it is a risk they don’t want to take.

“We don’t want a repeat of what happened in northern Saskatchewan. It only takes one person to infect the community.”

An outbreak of more than 150 cases of COVID-19 in a Dene village and surrounding First Nations in Saskatchewan has been linked to travel from the Kearl oilsands work camp north of Fort McMurray, Alta.

Manitoba Hydro scaled back its work and suspended travel in and out of the construction site in mid-March. Neckoway said First Nation’s leadership were wary of ongoing work there but agreed to the plan.

Last week, however, they learned that hundreds of new workers would be coming to the site for the planned shift change. Leadership from the four First Nations wrote to Manitoba Hydro about their concerns but Neckoway said they were not addressed.

That’s when leaders and community members decided to implement on Friday what they are calling a “lockdown” at the main entrance to the site to block traffic from going in. Neckoway said more lockdowns have been put in place at other entrances.

RCMP have been at the location, Neckoway said, but police have not acted even though the injunction gives officers the authority to remove the blockade.

Neckoway said members will continue the blockade until they feel that their communities are safe.

“This is to protect the lives of northern Manitoba people.”