In latest delay, construction at Toronto’s Union Station to drag on until at least end of 2020 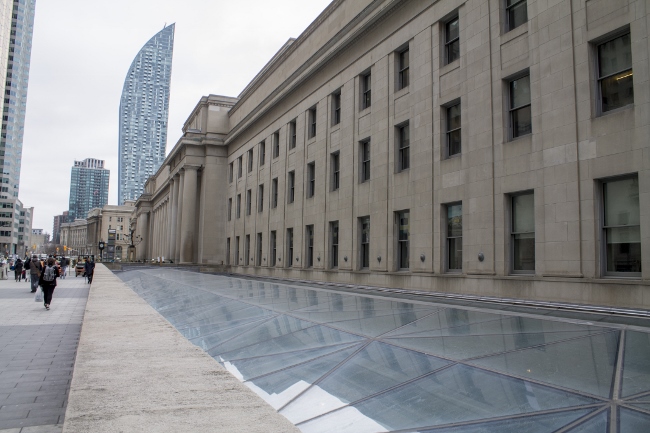 The new ‘moat’ at Union Station. The glassed-in section was one aspect of the revitalization work. It will let pedestrians access the station directly from the Toronto subway

After about 10 years of ongoing construction, work at the rail hub in downtown Toronto faces yet another delay, according to a staff report released Sept. 4. The report blames earlier performance issues with the general contractor and slowdowns tied COVID-19 for the latest timeline adjustment.

Early construction on the station began in 2010, with major works getting underway in 2011. The facelift was originally scheduled to be complete by 2015, but the complicated revamp of the nearly century-old station has dragged well beyond schedule and jumped over its original budget. During a media tour last year, the city said it was now targeting September 2020 to complete the project.

That report last week adjusts the timeline for substantial completion until the end of 2020 and forecasts additional capital costs for 2021.

“Staff are working with the City’s consultant, contractor, its bonding company, and other stakeholders to complete the work as quickly and efficiently as possible,” the report notes.

Among other challenges, the city said the reduced availability of trades staff and physical distancing rules during the pandemic have slowed progress on Union’s Bay Concourse, the main portion of the job remaining.

Despite the delay, the most-recent budget estimate for construction costs at the station remains intact. The city expects to spend a total of $824 million on the work, shifting $18.4 million originally slated for 2020 to 2021.