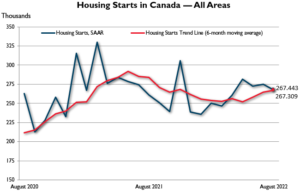 The standalone monthly seasonally adjusted annual rate (SAAR) of total housing starts for all areas in Canada reached 267,443 units in August, down three per cent from July, despite a small increase in the six-month moving average, reports Canada Mortgage and Housing Corporation (CMHC). The six-month trend came in at 267,309 units in August, however, up from the 264,467 units reported a month earlier.

The SAAR for urban-starts matched the three per cent overall drop, coming in at 246,771 units on a fall of multi-unit urban starts, which contracted four per cent to 187,602 units. Single-detached urban starts increased by one per cent to 59,169 units. And rural starts were estimated at a seasonally adjusted annual rate of 20,672 units.