A steep decrease in Montreal wiped out gains reported in Toronto and Vancouver, although housing starts activity remains elevated. 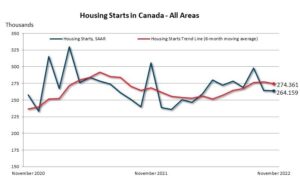 Canada’s housing starts experienced a meager 0.2-per-cent decline in November, despite growth in two of the nation’s largest cities. According to the latest report from Canada Mortgage and Housing Corporation (CMHC), the seasonally adjusted annual rate (SAAR) was 264,159 units in November, down slightly from 264,581 units in October. The SAAR accounts for any predictable changes that could impact rates on yearly basis.

Looking at Canada’s largest cities, Toronto saw a 20 per cent increase in total housing starts in November, while Vancouver saw rise of eight per cent. Montreal lagged with a 62 per cent decrease in multi-unit activity, which brought the overall level of housing starts in Canada down.