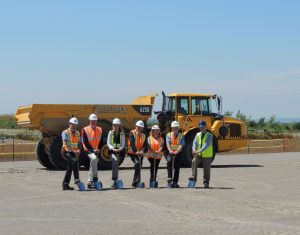 Honoured guests included Kim Rudd, Parliamentary Secretary to the Minister of Natural Resources and Member of Parliament for Northumberland – Peterborough South, and Bob Sanderson, Mayor of the Municipality of Port Hope. They joined representatives of Canadian Nuclear Laboratories, Atomic Energy of Canada Limited (AECL) and contractor ECC/Quantum Murray in a groundbreaking ceremony marking the start of construction of the first cell of the engineered aboveground mound where historic low-level radioactive waste will be safely stored for hundreds of years.

“This work is another significant milestone for the project and the community,” said Craig Hebert, PHAI general manager. “Once construction of the first cell is complete, the site will be ready to start receiving waste and the cleanup in Port Hope can begin.”

The Port Hope Project represents Canada’s largest environmental cleanup, involving the removal of approximately 1.2 million cubic metres of historic low-level radioactive waste from various sites within the municipality and construction of the aboveground mound where the waste will be safely stored for the long-term. The PHAI Management Office, led by Canadian Nuclear Laboratories, is implementing the project on behalf of Atomic Energy of Canada Limited, a federal Crown corporation.

“This is an exciting period and a true sign of the progress being made to clean up historic low-level radioactive waste in the community,” said Shannon Quinn, Vice-President of Science and Technology, AECL. “It is also very important to Atomic Energy of Canada Limited in its role in upholding the Government of Canada’s commitment to remediate the affected lands.”

Wednesday’s ceremony marked the start of work on the first of four cells in the highly engineered mound that has been designed to safely isolate the waste by encasing it with multi-layer base liner and surface cap systems. The work will be undertaken by ECC/Quantum Murray LP of Toronto, a landfill construction and environmental remediation company with extensive experience throughout North America.

Paul Hunt, ECC/Quantum Murray Director of Environmental Services, said that an experienced workforce has been assembled to build the first cell. “Our strong and capable team is excited to be a part of this project. We appreciate the opportunity to work with the Port Hope Area Initiative and look forward to executing the work safely and successfully while meeting the expectations of the community,” said Hunt.

Construction of the first cell will be completed in late 2017, with placement of waste from within the community expected to begin in 2018.

ECC/Quantum Murray, which has already successfully completed other aspects of the PHAI, will adhere to stringent health and safety plans, required by the PHAI under its Canadian Nuclear Safety Commission license for the project. Contractor requirements for the protection of the public, workers and the environment include dust management, occupational health and safety, radiation protection and traffic management.