Construction of new interchange is set to begin around the Edmonton International Airport trade hub in Leduc, Alta. 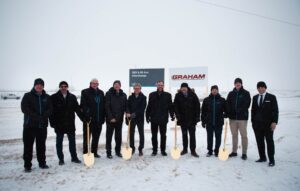 Graham is set to construct the 65th Avenue interchange project in the city of Leduc, Alta. The $112-million project is expected to support 660 jobs, with the ultimate aim of having the infrastructure project help the region reach greater economic potential.

“We look forward to partnering with the city of Leduc and Alberta Transportation to deliver this critical infrastructure,” stated Tom Cole, Graham’s vice-president of infrastructure. “The interchange will support safety and ease of movement of people and goods, and Graham is proud to be part of the project that will bring significant and long-standing benefits to the community.”

The QEII and 65th Avenue interchange project is a joint effort between the city of Leduc, Alberta Transportation, and the Edmonton Regional Airports Authority. About 49,700 vehicles travel this stretch of the QEII Highway each day.

“This is one of the busiest sections of highway in Alberta, and we’re going to help make it faster and safer to get around,” said Devin Dreeshen, minister of transportation and economic corridors. “It will take commercial and airport traffic off local roads. It will provide a better connection for Alberta businesses to the Edmonton airport, letting them get their products to the world a bit faster and a bit cheaper.”

Construction is expected to take three years and will commence in winter of 2023.