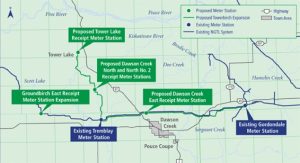 OTTAWA – Canadians have told the Government that we must protect our environment for future generations while growing the economy and creating good, middle-class jobs. The Government is making responsible decisions about moving Canadian energy to markets while investing in clean technology and supporting the long-term transition to a lower-carbon energy mix.

The $439-million project will involve the construction of two new pipeline sections totaling approximately 87 kilometres along with associated facilities in northwest Alberta and northeast British Columbia. The Towerbirch Expansion Project will create up to 750 jobs during construction, address the need for increased natural gas transmission capacity along the existing NGTL system and support economic growth. Approximately 82 per cent of the project will parallel existing rights-of-way or existing disturbances, and 89 per cent will be located on private land.

“Approving the Towerbirch Expansion Project subject to binding conditions reflects the Government’s principled approach to developing and transporting Canada’s natural resources in a way that creates jobs and protects the environment,” said Carr.

In January 2016, the Government announced a set of interim principles to guide decisions on major projects already being reviewed while longer-term reforms to environmental assessment processes are underway. The Towerbirch project was assessed using the interim principles.

In making its decision, the Government took into consideration the National Energy Board’s recommendation report on the project, Environment and Climate Change Canada’s assessment of upstream greenhouse gas emissions and the views of Canadians gathered through an online questionnaire and enhanced consultations with Indigenous peoples. The outcomes of all of these processes are available to Canadians via Natural Resources Canada’s web site.